1st November 1988
Round Ones
By Alternative
•
BBC/Electron 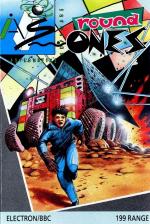 Here's just what the world needs - not a load of old balls, but a cut down, budget version of Arkanoid. Of course, it misses many of the features, but the basic idea is just the same. Loads of screens (loaded in blocks of eight) and a ball that you control by hitting it with a bat. Hit it properly and slowly destroy the pattern of bricks on the screen.

Again, in common with full price versions of the game, there are bonuses which can be caught for good or bad effect and, a new touch I think, an optional force field which protects you from the meanies which roam down the screen looking for trouble.

This isn't going to end the market for proper versions of the game, but it's a great pocket money version and should at least show you whether you find the concept fun enough to spend four times its cheap price. If only there were more budget games like this!

If only there were more budget games like this!