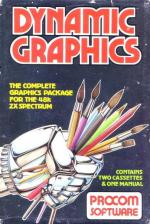 Can't stand the penetrating smell of oil paints and terpentine? Are you drowning in diluted, diffused water colours? Forget about paint brushes, mixing pots and smeary dirty hands. The canvasses of the future are VDU or television screens and the crayons give way to flexible utility programs. Today the applications are limited by the lack of affordable colour screen printouts, but this is bound to change in the near future.

Every artist will confirm that the selection of the right drawing utentils is of prime importance, and we therefore examine four drawing utilities now available to the budding Spectrum artist.

Graphical work on the screen may be subdivided into three main activities:

The selection of the right utility depends entirely on the specific application. Not all utilities provide facilities for all three disciplines: each one excels in one of the tasks.

Screen creating can be a very time consuming job. The basics are simple: set or reset the 49'152 pixels which make up the screen and give the 768 attribute positions the required value. If you provide for every pixel a minimum of 10 seconds for setting or resetting, you will have to work non-stop for five days, 16 hours and 32 minutes.

The colouring works out a fraction faster at two hours eight minutes.

Obviously there are alleviating factors which reduce the required time enormously. Not all the screen has to be dealt with on a pixel resolution. Text and fill areas can be handled in character resolution. Nonetheless it is of prime importance that the utility provides an expedient and proficient way of performing screen functions without having to go through any lengthy function select procedures for a simple screen manipulation. Added facilities such as diagonal cursor controls, screen magnification, window creation, scrolling, etc, give the user extra flexibility and can prove a very useful bonus.

Melbourne Draw scores the highest marks in user friendliness. This program provides the clearest logical procedure: screen and attribute handling are completely separated. The screen may at first be edited by positioning the cursor with the eight direction controls and then putting pen to paper for the actual drawing movement. The picture, including the usual edit area, can be created in 'black and white.' When satisfied the attribute edit mode is selected and the identical procedure can take place for the attribute character setting.

Melbourne Draw is the only program which allows the attribute cursor to be moved in a non-destructive (pen up) mode. The colour may be selected by simply pressing the correct colour key (ink and cap shift paper).

Melbourne Dew also provides a screen magnification facility, which can display a portion of the screen four or 16 times enlarged. This proves to be so useful that all the drawing is accomplished on the enlarged scale. The cursor position automatically dictates the screen area displayed and as a further bonus the entire screen may be pixel scrolled to centre the work area. There are no special draw functions such as circle, rectangle, etc, except fill.

The text mode includes the useful option of writing text in any of four orientations (l/r, r/l, u/d, d/u).

The program is aimed at providing a professional drawing board and proves to be a fast and efficient working tool for the serious user.

Dynamic Graphics allows the creation of a window of any size, which may be positioned, edited and copied anywhere on the screen,, thus providing for multiple screens or pattern generation within the screen. Further to this there is a rescale option, which will copy any rectangular area of the screen to any other part with different x and y scale. This can prove to be a very potent feature. Special draw commands such as line, circle and edit are also catered for.

Although Dynamic Graphics is first and foremost a moving graphics utility. Its inbuilt screen creator proves to be an exceptionally versatile drawing instrument.

Paintbox offers a Kempston cursor control option with its Precision Plotter screen editor. The inclusion of special draw functions such as fill, erase (last command), circle, radial mode and arc together with the option of including any of the 84 UDGs designed with the UDG editor provide for a useful screen tool. The omission of a paper colour control within the screen editor forces the user to go through the lengthy procedure of returning to the main menu for the sake of changing paper colour.

The list of options in the C.A.D. program suggest a very powerful drawing tool. However the basic command procedure of C.A.D, proves to be a stumbling block. Every function is called by pressing the appropriate command key, upon which the selected command is displayed in the information window. The user must then press enter for execution. This is even required for positioning the cursor. This all makes for a lengthy procedure, which ultimately takes the fun out of drawing. Apart from the usual cursor control there is the option of using memorised headings, but in practice it is very difficult to make good use of it. The shape creation function, which allows the user to stoe and recall a sequence of drawing commands, proves to be very useful for pattern generation or similar applications. C.A.D. has a complete set of special draw commands, which include among other things triangle, 3D cube and 3D rectangle generation.

Paintbox offers a complete service for UDG addicts. The program caters for four banks of 21 UDGs which can be called into the UDG area for access. The edit facility is complete and practical to use including inverse, rotating and mirror functions. The UDGs are stored together with a M/C routine for calling the individual banks from Basic into the UDG area. A sketchpad is provided for experimenting with related UDGs (multi-character sprites).

C.A.D. offers a less elaborate UDG facility. Up to 26 UDGs may be edited and stored.

Melbourne Draw has no special editing facility for UDGs but editing is accomplished anywhere on screen using the x16 magnification mode. Any of the 760 character positions on the screen may be assigned as any one of the 22 UDGs. Pixel scrolling may position the required shape within the character grid.

Dynamic Graphics is the only program to actually handle sprites and sprite movement from within a user's Basic program. C.A.D. caters for the creation of up to 40 24x24 pixel sprites (3x3 character), but leaves it to the user to inject any life into the screen. It does no provide any M/C routine for fast pixel to pixel movement.

Dynamic Graphics provides the user with a complete sprite animation facility and must be invaluable for the programmer who doesn't want to delve into the machine code labyrinth but requires smooth animation.

Six sprites of up to 4x4 characters may be generated and edited with the excellent sprite creator. The six graphic characters are treated as individual frames of an animated film and the user may test the resulting motion by selecting the animated display, which sequences the frames on display to create a living object. The character set may then be saved to tape to be called up for later use.

To integrate the moving sprites without any knowledge of M/C, a sprite user subroutine compiler is provided, which creates a sprite positioning subroutine anywhere in normal user memory. This subroutine can be accessed via Randomize User commands from within Basic. Up to 10 different frames may be positioned consecutively on the screen and the result (if handled correctly) is a very smoothly moving object.

The four programs under scrutiny all have their individual merits.

Melbourne Draw stands out clearly as a professional tool for title and background screen creations.

Paintbox provides the most flexible UDG creator combined with a useful screen editor.

Dynamic Graphics is a must for anybody wishing to create moving graphics within their own programs without bothering about M/C handling.

C.A.D. provides a multitude of different facilities for screen, UDG and sprite editing.

Provides a screen magnification facility, which can display a portion of the screen four or 16 times enlarged.