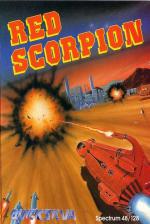 The Bombyx Moons are almost entirely composed of pure Talanite, which the evil Necrons are ripping off from the Bombyxians. Terran civilisation can offer them far more. To that end you, as a Star Commando, are sent to the Bombyx Moons to dispose of Necronian personnel and their military and communication installations.

Ferried by the mother ships 'Zhukov' and 'Coral Sea' you're dropped to a moon' s surface in a Red Scorpion space tighter. A head up display views the combat zone on a horizontally scrolling screen.

It carries four threat detectors, activated when enemy targets come within range. These detect above ground structures. Talanite mines, armed aliens, and Necron missiles. Additional help is given by the 'Coral Sea ' which relays information about Necron missile launches.

Enemy fire damages Red Scorpion's shields, with a twofigure number at the top left of the screen indicating their condition. When that rating falls to zero the next hit destroys the craft.

The ship's armoury is made up of armour-piercing missiles, cluster bombs, sonic stunners, a multi-frequency electronic warfare system, and a particle cannon. Points are awarded for each enemy target destroyed, and a total is shown at the top of the screen. Ten onscreen icons show the status of weapon and vision systems.

Both motherships are used during the operation, a rendezvous can be made with the Coral Sea and Zhukov provides heavy cover fire, this however causes damage to the Red Scorpion's shields.

Complete the mission successfully and promotion is yours.

'What's this, Battlezone with a plot and a strategy element? Nobody could possibly cope with the nasty icons, the hostile craft that you can't shoot because you're supposed to be friends and the rest of the abysmally slow and over-complicated gameplay. The graphics are as well defined as most vector graphics, but the icons leave something to be desired in the way of clarity. On the whole I'd give this a miss, it might have been worth a look for two quid, but for nearer nine pounds it isn't worth it.'

'I'm sure that there's a perfectly good game in this package... somewhere. It seems to have been lost in the unhelpful instructions - too much scenario and not enough fact. The whole idea of a Battlezone type game is always enticing if the graphics are last and Nicker-free - but this one misses out on the former. Red Scorpion is well laid-out, but it lacks the necessary speed.'

'I'm sure the authors are disappointed with Red Scorpion; I know I am. The packaging is very good, with a generally professional feel - but that 's what you expect when a company has been around as long as Quicksilva. Their experience doesn't come to light on the game though, which falls far below standard and is nothing more than a poor Battlezone variant. The icons on the bottom of the screen are a nice addition, but when compared to something as slick as Realtime's semi-ancient Tank Duel, it's not up to scratch.'

The graphics are as well defined as most vector graphics, but the icons leave something to be desired in the way of clarity.