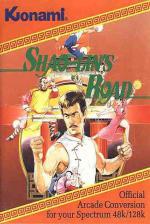 Yie Ar Kung Fu's hero - Lee - has finally mastered the not-sosubtle art of 'Chin's Shao-Lin '. Having completed his studies, he has left to travel the world in search of adventure. And what an adventure he has found! Trapped within a temple crammed full of hostile warriors called Triads, he thanks his shuriken stars that he took the time to perfect his martial art, otherwise he really would be in deep trouble. Using the skills he has learned over the years, Lee kicks and cast spells to rid the temple of his enemies. Only when this task is completed can he leave the temple and continue his journey.

The Temple contains platforms along which Lee's opponents scamper, doing their best to dispose of the intruder. Lee springs from platform to platform delivering his punches and kicks, condemning his foes to oblivion. A damage meter at the top of the screen keeps track of the blows that Lee takes, flicking from 'one' to 'two ' , then to 'three' and finally to 'out'. Being counted 'out' costs our hero one of his three lives.

Apart from being a bit of an expert with the old 'Chin's Shao- Lin', Lee can also summon magic to help him against the enemy. A magic ball rises from the dead bodies of Lee 's vanquished opponents - if he manages to catch a ball, Lee temporarily assumes its magical powers and can use it as a weapon for a while. Magic balls have different uses - for instance large balls can be rolled along and flung out like a yo-yo to tumble the Triads, knocking them off the platforms to their deaths, while flying balls of fire can be shot out along the platform, killing large numbers of the opposition.

Most of the Triads can be despatched with one kick or hit, but on each level there is one Triad who is super mean. Mere hits and kicks have no effect on this guy (or even gal in some of the later levels!). Lee has to wait until he is imbued with suitable magic powers before he can kill on the super baddies. When Lee manages to kill a Super Triad a large bonus is earned.

Ordinary Triads sent to their doom are worth 200 points apiece, and destroying other objects (such as large vases and odd skimmers) also adds to Lee's score. In true arcade style the player's score and the current high-score are displayed at the top of the screen.

'Shao-Lin's Road is yet another arcade conversion that has gone slightly wrong. Okay, so I didn't really like the arcade version, but this does it no Justice at all. The graphics leave a lot to be desired: the characters are badly drawn and they tend to jerk around the screen. Also, the backgrounds are a bit complex, causing quite a mess when the characters move around. The sound isn't at all bad - there's a lovely tune on the title screen and a few decent effects scattered throughout the game. However, I'd only buy this if I was really desperate for a beat em up.'

'If this is the follow up to Yie Ar Kung Fu, then what is Vie Ar Kung Fu II the follow up to? As with all of THE EDGE 'S products, the graphics are the first things that strike you. The characters are reasonably sized and instantly recognisable. The backgrounds are very well drawn, although I thought the second stage colour scheme could have been better. One minor quibble is that when you finish you have to re-select your control method. Despite this, I found Shao-Lin's Road to be a very playable follow up, and I'm sure it should please 'bash and thump' fans.'

'This is very like Kai Temple, but the main difference is that you can almost enjoy playing this one. The graphics are okay(ish), and the title tune is passable. However, as far as playability is concerned it's a wee bit iffy. From what I've seen the original version wasn't much better, but then that's the choice of THE EDGE. I didn't find this game very playable or very addictive.'

A very playable game, and I'm sure it should please 'bash and thump' fans.