1st August 1984
Realm Of The Undead
By Lothlorien
•
Spectrum 48K 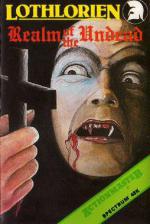 Stake 'n chips, 'Fangs for the Memory', and other assorted funnies come to mind as you take a trip into the Realm of the Undead. Haunted by tarantulas, bats and the Dark Lord himself, your task is to clear three screens and rescue trapped villagers.

Screen one is a simple maze patrolled by tarantulas, whose bite is death unless you have collected sufficient quantities of garlic cloves. Contact with a member of the undead will result in the loss of a clove of garlic. Once the garlic is harvested it's safe to go and press the lever which is somewhere at the top of the screen. This causes a secret exit to appear, which must be reached before it vanishes again.

Getting onto the second screen, you must free the trapped villagers. This is done by entering a long maze, avoiding the bats and tarantulas, getting to the lever at the bottom and then returning up through the maze to the top level where pressing the lever has opened the castle door. This also releases the villagers which must be 'run over' to rescue them. The castle door only stays open for a short while and closes anyway if you run into a bat. Running into a spider will lose you more garlic. Entering the castle door takes you to the third screen.

Here the Dark Lord will leave his coffin in the centre and chase along with a bunch of zombies. Three bites from Drac and you're dead. A lever beside the coffin opens the door to a store room at the top right where you can collect a stake. Another lever at the top left causes a hammer to appear for a short while. This too must be collected before either Dracula gets it, or it disappears. Having collected stake and hammer you can entice Drac back into his coffin, shut the lid and drive a stake into his heart. Van Helsing would be proud of you.

'Realm of the Undead is quite playable considering it is programmed within the realms of Basic. The graphics are neat but could do with a little enlarging, but the biggest problem seems to be that the game is a little bit too simple. Even a mega-dodo like myself completed the game on skill level one, but at the other end of the boot the game is unplayable on skill level five. So this means the addictivity goes down quite a bit. The idea for this game isn't too bad (well not really bad anyway) but graphics and sound could have been enhanced. A nice touch is when you've completed the game and killed Drac, you get warped back out of the castle. My biggest grumbles are with the small graphics, lack of sound and the fact that the instructions don't tell you how to shut Drac's coffin.'

'This is a fairly original idea, although the game itself isn't because the concept is played out in a typical maze with chasers situation. Graphics are small and undetailed and move from a slow, jerky pace to such a hyper speed on the higher levels that you can hardly see them! Colours are chosen fairly well although I think a darker background would have been better. I like the way that eating a clove of garlic makes you squeak - exactly the sort of sound I would expect to hear from anyone eating a whole clove of garlic! Yuk! Other than this, you could say there wasn't much sound at all. The game itself is fairly playable, although I wouldn't really recommend it.'

'Realm of the Undead takes you into Carnell's realm (except they seem to be very dead) and does it more entertainingly than The Crypt or The Devil Ride In. With all its drawbacks of small, rather early-Spectrum period graphics, the game manages to be playable and fun. However, I can' t imagine it having much lasting appeal for the reason that it is too simple overall, with only the three screens which are quite quickly completed. Some variability is added with the second screen where the maze shapes change from game to game, some being very mean. In the end, a bit lightweight.'

A bit lightweight. Some variability is added with the second screen where the maze shapes change from game to game, some being very mean.