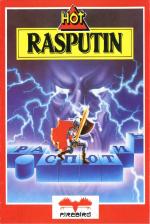 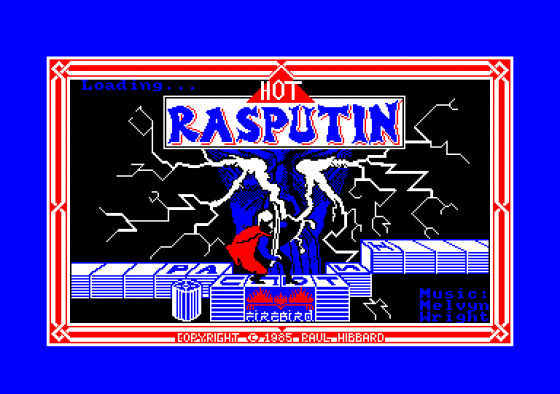 If you were expecting tales of a hairy, lecherous Russian doing unspeakable things to the women of the Czar's court you'll be disappointed. If you wanted an exceptionally difficult arcade adventure with terrific graphics, maddeningly addictive gameplay and some great features then hold onto your fur hats, vodkas and Cossacks because this is it.

Rasputin is indeed the evil figure behind the game and whose power you have to destroy. To do this you have to obtain a jewel, but this is the final step in a very long task comprised of numerous steps. The screen display is a 3D view of various courtyards and obstacles that twist into some compli-cated layouts with many features.

You control a Crusader knight who is armed only with a sword and a shield and the ability to jump about in armour - although he doesn't clank. He can be rotated left and right and walked forward, diagonally when he is facing "up" or "down" screen. This tried and trusted perspective from games like the Ultimate titles and Chimera works well, although the control can be difficult, particularly in tight spots where you inevitably panic.

On exiting from the start room you find a main corridor with eight doors leading off it, each one marked with one of the Russian letters that together spell "Rasputin". The corridor is populated by guards who initially don't move but will become activated with time. The moving ones can be killed with your sword but they can also kill you. This returns you to the start of the screen and costs vital "life force" energy.

If life force runs out then the game ends and you're given a percentage score. The best I've managed is 0.68% so you can see how tough the game is. Anyone who can find an infinite life force poke will deserve a medal (or a tenner). Life force is also severely depleted by walking off a platform into mid air, causing you to plummet to a screen bare apart from some clouds. Crusader will land on one of these and float back up - but he loses a lot of energy while he does so.

Entering any of the eight doorways will reveal the nasty nature of your task. They are all constructed of blocks to make platforms, stairways and lifts with 3D perspective often playing a part to confuse your path ahead. The real problem isn't moving around though - it's the weird and deadly varieties of life that inhabit nearly every screen. These include tall cyclopian creatures, bouncing balls, fire-breathing dragons, transparent killer blocks, evil eyes and a cross between a bulldog and a plucked chicken. Most of these can be fended off or killed using the sword and shield.

In some of these screens there are white blocks to be jumped on to make them disappear. When all of them on one screen have been absorbed a monster head will appear that has to be destroyed to obtain another white block. Once you've got that you are past the first basic stage. All you have to do now is repeat that seven more times, identify the colour-coded sections, neutralise the sets of evil eyes, get the letters and... I give up. Suffice to say there is plenty to do and all will become clear in time.

The game will have to be approached in an orderly fashion and completed stage by stage. Efficient use of sword and shield strength, which are very limited, is essential to the final completion of the task but completing this game may take months. A superb game with terrific graphics, fantastically addictive gameplay and one of the toughest overall objectives in an arcade adventure yet.

P. Beautiful and deviously designed rooms.
P. Great monsters and other moving features.
P. A tremendously tough long term task - will it ever be completed?
P. Many stages requiring both good reactions and platform planning.
P. Puzzling, mapping and a good memory are needed.

N. Maybe a bit too tough?

If the great Bob Wade scored less than 1%, you can imagine how well I did! I'm too ashamed to mention a figure. The game is tremendously tough and brilliantly executed. Despite its initial similarity to all the other 3D arcade adventures, it's a program of real class and more than a little originality.

This game is mean. It just keeps killing you, and you just keep coming back for more. If the wicked perspectives don't get get you, the monsters will - but it's so addictive, you just can't stop playing it. Prepare yourself for sleepless nights, derisory scores and endless frustration.

The game is so difficult that many people may feel it is asking too much of the games player. This thought is countered by the fact that here in the office we just couldn't stop playing it. The addictive quality is in exploring the game, discovering new rooms, completing tasks and just trying to cope with the sheer scale of the task.

Scoring a fraction of a percent on most of your early games doesn't put you off but encourages greater effort to string all the tasks together. Once you've learnt how to crack some rooms things will start to fall to place and higher scores can be achieved - any game now I'll crack that one percent barrier.

Everything's perfectly visible, but you needn't think that'll save you.

Beautiful and deviously designed rooms plus a tremendously tough long term task - will it ever be completed? 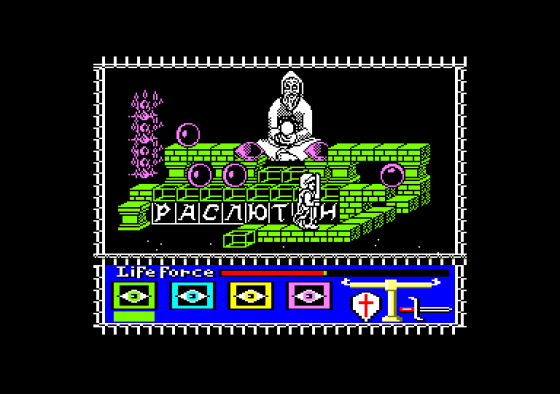