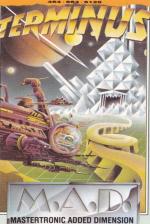 Budget software really has entered a different dimension these days. In the past multi-character arcade adventure-exploration games have been the stuff of full-price titles. Not any longer, because here you have just that.

The four characters you control are Mobod, Xann, Magno and Spex. They are Wanglers, teenage rebels, trying to rescue another of the team, Brains, from the authorities. He's trapped on the prison planet Terminus and you have to release him.

Each of the four characters has different control features that make getting around particular areas of the game easier or harder. Mobod can fly around, but you have to keep pushing up to keep him there. Xann does the same but can stay up for only a limited time. He also has less manoeuvrability.

Magno can fly straight up and crawl along the ceiling, also only for a limited time. Spex bounces everywhere and is the hardest of the four to control. All four Wanglers can also walk around the complex.

Terminus has 513 locations, all very colourful and most packed with hazards. Static creatures, flying robots and various defence barriers all can drain your energy. Energy can be replenished, but the units that do so aren't easy to find.

You'll encounter teleport terminals with which you can switch characters and continue the search. There are also computer terminals that log your position and can be returned to later. Computers also control a series of locked gates that have to be opened.

Exploring the complex is a lot of fun, particularly because of the different characters. There's plenty to get through, puzzle elements and even shooting to liven up the proceedings. Super value for £2.99.

The game is cluttered. Too many graphics in too little space. This wouldn't have been a problem if the style had been kept constant throughout the screen. Conflicting patterns make playing Terminus a bind. Still, there's lots to explore, the odd tune, and it's cheap and enjoyable.

A few designs get lost, but that's no problem.

Graphics 78%
P. Lots of colour and detail.
P. Well-animated characters all over the place.

Grab Factor 71%
P. Four different characters to control.
N. You may tire of the exploring.

A good one for the mappers...! There's plenty to get through, puzzle elements and even shooting to liven up the proceedings.