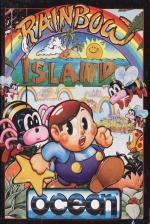 Somewhere, over the rainbow, way up high... lives a little boy who wants to go adventuring. He wants to see the world of Rainbow Islands before it's flooded out of existence once and for all. A land so cute it makes My Little Pony and The Care Bears look like Detroit street gangs.

The aim of the game is to work your way to the top of a platform world, avoiding all these big, horrible beasties who are out to get you. To help you survive this ordeal you've one special weapon. Not a gun, not a bomb, not even the ability to 'tolchock someone in the yarbles' (Clockwork Orange? Stanley Kubrick? Oh, never mind) - just rainbows!

Now this isn't the raw deal it may sound, because if there's one thing the inhabitants of the islands don't like it's rainbows. They hate them, in fact, mainly because they're fatal! Now these rainbows can also support your body weight, which proves very handy indeedy! Fire one out in front and jump on, and all of a sudden you've a solid platform in mid-air. A definite must in a land of ever-smaller platforms that are ever-further apart.

The star of this cutesy extravanganza is a small lad; the villains of the piece all manner of monsters and machines. Our hero (who can be politely described as stout) wobbles more than runs, but his size doesn't inhibit his ability to leap up to the next level. When he finds himself out of reach of the next platform, then the true value of the rainbows becomes apparent, paving the way ahead like multi-coloured stepping stones [I think I'm going to be sick! - Ed].

On his travels to the top, our hero encounters mountains of food left lying around, and of course picking up the grub gives him special powers in the best platform game tradition. The 'bows come in handy here too, because if your rainbow touches an object, it's yours!

The first four stages are on Insect Island, a land filled to overflowing with caterpillars, bees, ladybirds, butterflies - and a spider big enough to put Miss Muffet off curds and whey for life. Playing with the rainbows reveals that you can trap your enemies as well as kill them, but don't mess around for too long or it will all end in tears.

Soon, the ways the various insects attack become obvious, as do the special properties of the the items collected on your journey. The best of all has to be the double 'bow jugs. Get one of these and the range of your rainbows increases by a factor of two. get another and it's tripled. You can zap the creepy crawlies from a safe distance, and get items almost without moving.

As you work your way through the first island the text messages give you helpful hints like "hurry up" - you'd better pay attention. The whole island is flooding and you must make it to the top before time and tide catch you out. Hang around too long and the water will start creeping up the screen...

Reaching the top of the world earns you the right to some freebies. A shower of stuff flies up. which you've only got a limited time to catch. It doesn't seem to do much good, though, apart from earning points. And points soon lose their importance as each level becomes an individual challenge that has to be finished no matter how many goes it takes.

The conclusion of the Insectoid Isle is a showdown with the big spider, a super arachnid who has to be systematically stripped of his energy. This can only be achieved by running, jumping and shooting a lot. The first two factors reflect the gameplay, the third increasing difficulty.

After topping the spider you travel to Combat Island, which is inhabited entirely by small scale models of military vehicles. These are cute but deadly, and actually fire back [Don't blame 'em - Ed]. Island world after island world follows this in nice small stages, each with a harder nasty to kill and a more severe flooding problem. The difficulty factor increases almost as fast as the addiction.

The gameplay level is intense, as more and more of the platforms can only be reached by carefully laying a rainbow trail ahead of you. This is dangerous stuff, especially once the floods have become a visible threat, because if you hit a 'bow wrong then it crumbles into multi-coloured dust. This leaves you hurtlmg downwards, desperately trying to find something to land on before splashdown. There are also jewels to collect en route, each displayed at the bottom of the screen. But for the first few games these are of little interest as you strive to get further than ever before.

The overall execution is exceptional, with only the slightest hint of flicker on the main sprite to mar the extremely polished effect. This is soon forgotten as the rainbow magic works its spell. It's simple in concept and laid out as if to appeal to the three year olds among us. Look deeper - and after a few games you'll be hooked.

It's refreshing to see a game that doesn't rely on violence to sell itself, just solid gameplay, vivid colourful graphics and a neat coin-op licence. Rainbow Islands has a blend of overtly cute humour and cunning design that will win it a horde of fans.

One thing, though - whatever you do, under no circumstances should you ever play Rainbow Islands in front of any younger brothers and sisters, or your CPC won't be yours much longer!

Nice graphics and very playable, a really good game. The soundtrack reinforces the cutesy style wonderfully - but how much cute can you stand?

A waste, but perfectly playable!

Graphics 90%
P. It's all so cute!
P. Glorious technicolour - eat your heart out!

Staying Power 92%
P. Technique is all-important.
P. You just have to finish the next level.

Instantly addictive... The soundtrack reinforces the cutesy style wonderfully... How much cute can you stand?