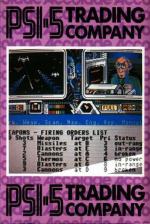 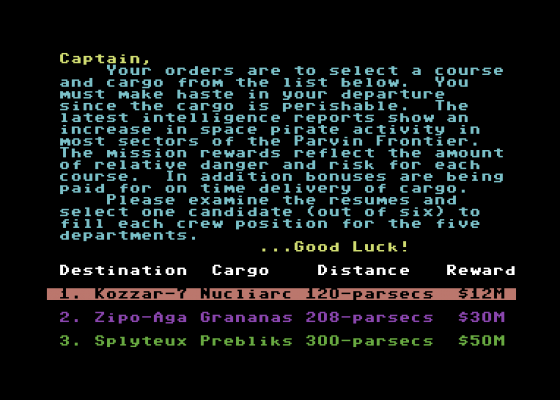 There are two ways to trade in space. Elite placed you alone in the cockpit. Whether you were bartering or blasting, you took overall control of the situation. Psi 5 tries for an even more ambitious format, much closer to a Star Trek scenario. You become a fully fledged Captain, commanding a full crew.

I doubt that there has ever been a more ambitious game on the humble Spectrum. If ever a concept cried out for disk access, this it. But until the +3 arrives, the first adventure for tape users will be coping with Psi 5's multi-load. This is made all the more tricky by an apparent crash once the crew is loaded. But don't panic; flip the tape, hit LOAD"", and soon you'll be ready for take off.

The secret of success in Psi 5 lies on the ground though. If you don't obtain the right crew, it'll lead to problems when you're light years from home. Your ship has five posts to fill, in different departments, and six individuals to choose from in each case. It's up to you to decide whether the expert with blasters who knows next to nothing about missiles is a better bet than the multi-weapon expert who lacks field experience. 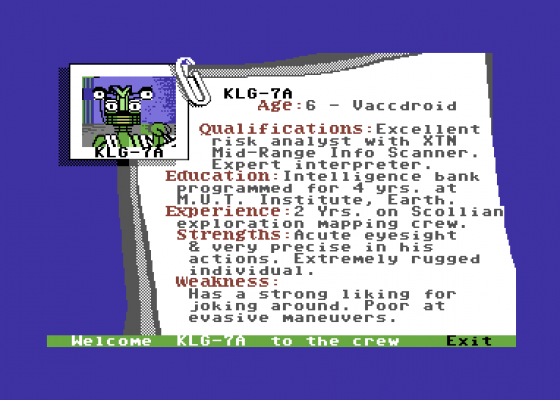 Even more ambitious is the way that the potential crew have individualised characters, detailed in their reports. Can you afford to take on the engineering genius who is headstrong and has had arguments with superiors in the past? Will you have time to keep an eye on a navigator who is slow to initiate actions and goes to pieces under stress?

With all these decisions it obviously makes sense to choose the simplest mission to start with. This won't pay too much, but there's less risk of getting lost in space or attacked by pirates if you play things safe. After that, it's the treacherous second load and you're underway. Even blast off is a tricky business, but at least the instructions suggest the ideal sequence, and you'd be advised to follow it.

Psi 5 doesn't present you with the elaborate graphics of Elite, you can watch through the view-screen as that unidentified ship swoops in and lets you know that it's also unfriendly.

Mostly though it's a mass of menus and messages, which can take a little time to learn, but at least they avoid the confusion of keys that would take an Einstein to understand.

You just need left-right and select to contact a department, and then a system of sub-menus lets you issue commands. Let's suppose that you're happily underway when that pirate appears. Contact the navigator and bring the ship to a halt. Now request scanning to examine the ship. Sit tight until it tells you what you're up against and the best choice of weapons, then move post haste to the weapons officer. Tell him to fire at will, using the relevant form of attack.

Play for a while though, and you'll eventually feel like Captain Kirk, taking messages from the crew and learning whether you made the correct choice. Psi 5 has a few ragged edges, but it's good to see something of this scope attempted on the Spectrum. It's exciting and different, and you should give it a try.

It has a few ragged edges, but it's exciting and different, and you should give it a try.