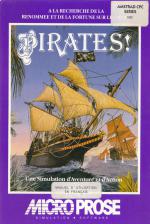 Supplied with the disk is a long and detailed instruction manual and a map of Caribbean. There's a lot of information in the manual, but there's also a quick start section to get you into the swing of things. The map is essential if you're to travel the seas and plunder successfully.

There are three options presented to you as soon as play begins: start a new career, continue a game or command a famous expedition. When you start a new career you can choose your nationality and also which skill you want to be good at. The skills are: fencing, navigation, gunnery, medicine and wit-and-charm. The choice of skill can considerably alter how you do in the game. Your nationality can be any of the following: English, Dutch, French and Spanish. You can also choose a particular historical period too. These range from the Silver in the 1560's t the Pirates Sunset in 1680. There are four difficulty levels you you play at: apprentice, journeyman, adventurer and swashbuckler. They range from easy to very difficult.

Once all of the start-up is over, play begins properly with you becoming dissatisfied with work on a sugar plantation. You find a seaman and ask to join a ship. After answering a question concerning the treasure fleet or silver train you get to duel with the captain for command. If you win the battle of swords then you take over command.

You begin play in port where you can choose from a menu to visit the governor, a tavern, trade with a merchant, divide the plunder, check information or leave town. A visit to the governor or tavern provides you with useful information. Extra crew can be hired in the tavern too. Trading with a merchant will get you some cargo just in case you want to do some legitimate trading, but it's much more fun to be a pirate and sell the merchant your stolen cargo. Dividing the plunder comes into play when you want to go into temporary or permanent retirement. When you're ready set sail for the high seas and go and seek your fortune.

Once at sea you'll get messages from your lookout if he sees anything. You then have the option to approach or ignore it. If you do get close enough to a ship then you have a choice of sailing away, hailing for news then you'll get information similar to that obtained from the tavern and this option is better with ships of your own nationality, you do want some safe harbours after all.

Close for battle with the enemy and the screen switches to a view of the two ships. At first you'll only be in cannon range, but they can be used to soften up your enemy. When you think they're ready then it's time to board the enemy vessel. The result of the battle is decided by a duel with the enemy captain. If you have more men then you're more likely to win the fight than if you have less. A captured ship can be plundered and sunk or you can keep it and sell it next time you reach port. Unfortunately, a damaged ship will slow you down.

Ports can also be attacked and they often have lots of plunder. However, they are heavily defended and you may get severe ship damage. Ports can be stormed and the result is obtained in exactly the same way as a sea battle. All-out land battles can also be fought. If you lose a battle at any time then you'll be incarcerated for a few months and then a release will be negotiated. Hitting one of the many reefs will result in you being stranded on an island for a similar length of time. Play can continue for as long as you want, or until you become too old and sick to live the life of a pirate.

The graphics are chunky, but colourful. Some of the pictures of people are quite pretty. The sound effects are nothing special, but tunes do crop up at times and they are generally good.

Although this is not the greatest game in the world, it's fun to play. There are plenty of options to choose and it'll take a long time before you progress through the ranks. Unfortunately the price is going to put many people off. Before you go out and spend £20 on this one, have a look at it.

There's a nice atmosphere about the game, from the superb packaging, through the excellent pictures to the gameplay itself. It's not what you would call instantly addictive, but it's the sort of game that you'll sit down with, read the booklet, start playing, get gradually more involved, and before you know it you've spent half the night playing it. Eventually you'll tire of a life on the ocean wave, but there's enough variety of tasks and challenges that it won't be for a long while. Shame about the price, but it just means you probably ought to try before-you-buy just to make sure it's your kind of game.

Everything is just as easy to see in green.

Grab Factor 78%
P. Very well packaged with a map and detailed instruction book.
P. Piracy on the high seas is challenging and fun.

Staying Power 86%
P. A wide variety of options keep you busy.
P. Progressing through the ranks is a long term objective.

Eventually you'll tire of a life on the ocean wave, but there's enough variety of tasks and challenges that it won't be for a long while.