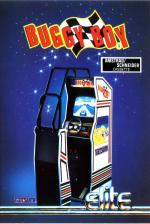 Climb into the driving seat of your Baja Bug and prepare to race along a track filled with hazards. There are no other cars to compete against, this is just man and machine against obstacles and the clock.

There are five courses to choose from: off-road, north, south, east and west. The tracks are made up of five stages with a time limit in which to complete each of them. The off-road track is a cyclic route with the start and finish being in the same place, the others have check points and a final destination.

The tracks are made up of a road with a hard shoulder down either side of it. both of which have many good and bad obstacles in the way. Gates, time gates, flags, fences, walls, trees, logs and molehills appear across the width of the road. Gates give you bonus points, time gates add two seconds to the time limit for the next stage, flags score you points and collecting five gives a substantial bonus.

At the top of screen is the status area which shows you how far you've travelled around the track, score, time left, number of time gates, flags collected and what gear you are in.

Fences and walls bring you to an abrupt halt with the buggy ending up on its roof, wasting valuable time. Driving over molehills and tree stumps puts you onto two wheels for a little trick driving. If you hit a log then you fly through the air avoiding any ground based hazards, but turning a corner in mid air is impossible.

After a short countdown the race begins with time ticking away at the top of the screen; if it runs out then the game ends and you get bonus points for every stage that you finished. Completing a stage resets the timer and you are given two bonus seconds for every time gate that you passed through. More and more obstacles appear as you go through the stages making life much more difficult.

Footballs appear occasionally and bumping into them gives you bonus points. Puddles and tumbleweed also appear and they slow you down a little. Completing all five stages takes you to the high score table and the game ends. It's a pity that you don't automatically go to the next track in the list.

Scrolling of the screen is done well and the scenery is colourful. The buggy is well defined and when it hits a log, leaps into the air and lands with a bounce it looks particularly good. There are some minor problems with flickering graphics at times. A tune plays before the start of a race, but there are no in-game tunes. Sound effects are simply crashes and the hum of the engine.

Five courses with five stages to each is sufficient, although more variation would have been nice. It does play a lot slower than the arcade version, but if it was much faster it would be unplayable because the obstacles would be too tricky to avoid. This is one of the better racing games to come out this year but still lacks punch and excitement.

The thing that initially stands out, and is most disappointing, is the slow speed at which the game proceeds. This is in fact essential for keeping the game playable, but it means there's little adrenalin rush or sense of movement. Otherwise it is an enjoyable driving game that will keep you occupied for a while and prove reasonably tough to complete.

Grab Factor 73%
P. Has that addictive quality that makes it instantly appealing.
N. Plays slowly - no feeling of speed.

Staying Power 64%
P. Five tracks with five stages to keep you occupied for a long time.
N. The stages are all much of a muchness.

A playable arcade conversion, but it's slow... Five tracks with five stages may keep you occupied for a long time.