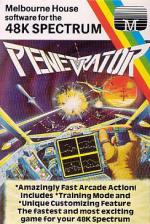 Melbourne House's Penetrator is a splendid version for the 48K Spectrum of the arcade favourite, Scramble. In case you don't know (Where have you been for the last few millenia?), Scramble is a game where your fighter soars across a horizontally scrolling landscape of caverns and narrow mazes, dodging ground-to-air missiles and flying saucers. You can bomb the buildings on the precipitous slopes below. Almost all the features of the original are included in Penetrator, and there are a few extra ones besides.

Due to your ship's ability to fire at airborne aliens or missiles and bomb the radar installations on the ground, Penetrator has six control keys. Fortunately they are distributed sensibly around the keyboard and the P key has been ingeniously programmed to thrust and fire depending on how long you keep it pressed - making life a lot easier!

Penetrator has five phases of action, ranging from open-air ground attacks to edge-of-the-seat manoeuvering along narrow corridors redollent with missile towers. A delicate operation, but it can be pulled off if you stay as far forward as possible at all times.

While the arcade version has a fuel gauge to keep your eye on, this has been replaced in Penetrator by a 'danger level' indicator; if too many radar bases are missed, this counter increases dramatically and the enemies become more intelligent - if the level reaches "Red Alert" then look out! You must now avoid guided missiles and crafty aliens who hide behind rocks away from your line of fire and swoop down on you when it's too late to hit them.

The graphics incorporated into the game need only one word of introduction - stunning! It's all hi-res, an so well animated that the rotating radar bases almost slip into three dimensions as they spin on their turrets. The explosions are satisfying and your ship's laser blaster can keep up easily with your twitching finger, even if you're the fastest arcade gunner in the West! Unfortunately, you are limited to two bombs at a time - which is a pity as there's so much to hit. The sound, too, is excellent, especially the sirens, explosions and game tune.

The sound and graphics add to Penetrator's addictive qualities, but the actual game is very challenging and difficult, which can only be a good thing. The changing phases maintain interest, as does the incorporation of a mission which must be carried out rather than just blasting aliens all day. This task confronts you in the fifth phase, where you have one chance to bomb an alien base down a narrow chasm - miss and your ship obliterates colourfully on the end wall of the caves. If, on the other hand, you manage to hit the thing, you are rewarded with thousands and thousands of points and a lengthy fireworks display which is pretty at firsst but becomes tedious. Even then the fun's not over! Now you have to get all the way back to your own base by negotiating all four phases in the opposite direction.

Penetrator, though lengthy, is a first class loader and boasts an excellent starting picture just like the drawing on the cassette inlay. A nice menu is printed and then you're into the actual battle. If you should find all the action a little too much, then there's an excellent training mode where any phase, except the final bombing run, can be practised with infinite lives at your disposal (must cost the training centre a fortune in ships and parachutes!).

Of all Penetrator's first-class features, the most outstanding is the redefining command. If you ever master Penetrator (can I have your autograph?), the addiction isn't lost: with this feature you can change the landscape (floor and roof) and the position and numbers of both missiles and radar installations in the ground. Each new landscape can be saved on tape and loaded back at any time.

Thus, you can have hundreds of different versions of the game in your collection and make it as easy or difficult as you like. One point to note, however, is that accurate positioning of the missiles is imperative, as any uneven surface below their foundations causes them to explode automatically during the game and creates errors in future explosions.

There are little or no criticisms to be made about Penetrator. If you're an arcade addict, then Melbourne House have a real winner for you here. As the captain on the inlay says, "If you have a 48K Spectrum, then you must have Penetrator!"

There are little or no criticisms to be made about Penetrator. If you're an arcade addict, then Melbourne House have a real winner for you here.