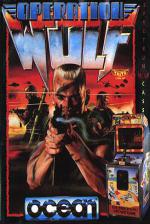 Eat lead scumbag! Akkakakakkabab... Boooboom! This is unbelievable. I've just wasted 130 enemy troops in graphic detail and I still haven't had enough. This game is the sort of thing that gives pacifists nightmares.

Operation Wolf - in case you've just emerged from a viet-vet rehabilitation programme - is based on the rescue of a number of hostages who are being held by the "enemy". The screen is presented head-on, with the bad guys rushing in from either side of the screen and firing out at you.

You're armed with an Uzi, a grenade launcher and a limited supply of ammunition. The name of the game is lightning reactions and a happy trigger finger.

You find yourself right in the thick of things, even at the start. The first section of end mission (and the first load of 6 + on 48K machines) is the enemy's communications setup. You've got to blow the hell out of everything, ensuring that no word gets back to the main base of your impending arrival.

The goons aren't slow to pick up on your whereabouts and the screen will fill up with nasties before you can say Colonel North. There are about four different lateral planes (positions "into" the screen) for the footsoldiers ranging from right back in the distance to slap bang on top of you.

The right hand side of the screen is largely filled with information about your damage level, how many baddies are left on the level, your score etc.

Using the cursor which represents the sight on the gun you let the enemy have it with either a spray of bullets or a more effective but rarer - grenade. Did I mention the armoured cars and helicopters that you've got to contend with? Oh, well they need about ten hits each or one grenade before they'll go down.

Once you've given the other side what can only be described as a right good seeing to it's off to the next level. Each stage has it's own features like parachuting bad guys, boats, troops with armoured jackets etc.

So that's the basic formula. What makes it so great? The graphics are fantastic. If you've checked out the demo on this month's tape you'll see what I mean. The scrolling never slows down, even when there are about ten guys on the screen at once.

There's also a real feeling of panic that sets in. It's so tough to keep the numbers of enemy troops down to a manageable level you end up losing any sort of strategy you might have planned beforehand. It is also possible to develop a disturbing degree of contempt for the other side and seethe about their victories for hours.

Along the way there are bonuses such as extra ammo to be had and things not to shoot, like innocent children etc. By far the best is the fabled Super-machine gun which endows you with firepower vaguely akin to an entire SAS team and you can clear a whole screen in seconds, firing at about twice the regular rate with no depletion of ammunition supplies.

While you score more points for ending up with a higher number of hostages at the end, any number will suffice. There's no point taking extra hits guarding a hostage when you've already saved four.

I found it virtually impossible to decide on a decent strategy. The grenades are so useful for clearing groups of soldiers that I invariably found myself trying to fend off end of level helicopters with the machine gun.

Fault-finding though it is, the sound is a tiny bit lacking in atmosphere. But for goodness sake...

It's undoubtedly a fantastic conversion of a marvellous arcade game. There's even a Continue option, available once per game which allows you to carry on the mission from the last level you reached. You'll need it.