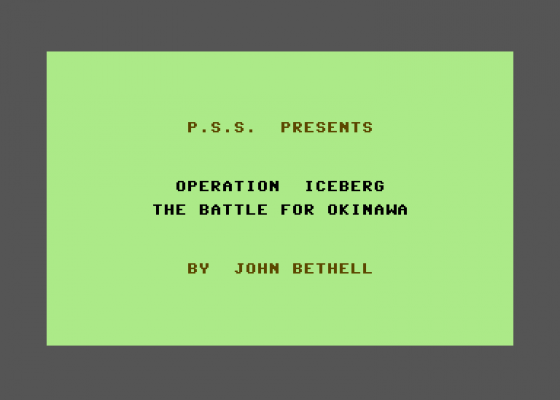 Another Second World War game: this time it's one of the Classic Conflicts series of old PSS titles at reduced prices.

By March 1945, the advancing Allies had reached the island of Okinawa in southwest Japan. They wanted to capture it to use as an airbase and harbour for their invasion of Japan - and the Allies considered their assault on Okinawa a dress rehearsal for that invasion.

As so often in the Pacific conflict, the Japanese resistance and Allied losses were massive. Kamikaze pilots sank 36 Allied ships; 50,000 US troops were injured or killed; 108,000 Japanese died. In the face of these figures, American commander Douglas MacArthur had to revise his estimates for the capture of Japan itself - after Okinawa he expected to need five million men and suffer a million casualties. So the Okinawa experience helped persuade the Allies to use nuclear weapons and end the war without another great battle. 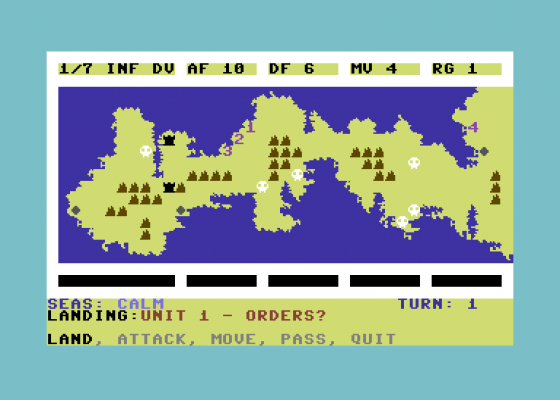 But is PSS's reconstruction this historical background is merely an excuse for yet another game in precisely the same mould as Falklands '82 and Iwo Jima. If you've seen either of these, you've seen Okinawa.

Units start at sea and are landed on the island. Then they crunch around the landscape discovering enemy units, supplementing their own firepower with offshore assistance. There are minefields, long range sharpshooters, and rules that limit action in a turn to either moving or firing. Everything that can possibly be the same as in Iwo Jima and Falklands '82 is the same; nothing is added or taken away. If you like Iwo Jima you'll like Okinawa. End of review?

Well, not everyone has played those other two island-bashing games, so I'll proceed... 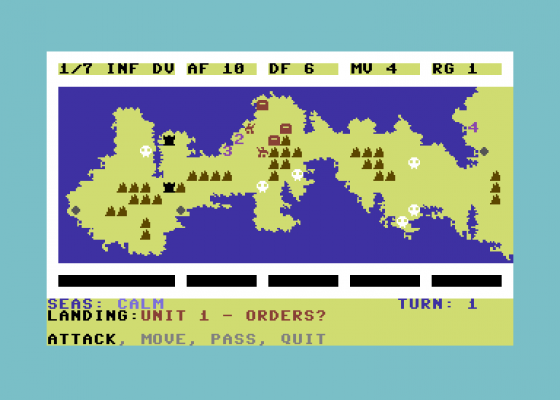 After choosing from a generous eight difficulty levels, the player (who leads the Allied forces) is presented with an unexciting two-tone map of Okinawa. The scenery is varied by mountains, minefields, villages (which are not named, and are represented only by dots) and numbered beach-heads (seven, dotted around the coastline). All these features impose the usual kind of movement penalties on units crossing them.

The game proceeds in straightforward two-phase turns, with the Allied forces getting their move first after the computer has invisibly positioned the Japanese defences. The player has ten units on the first turn. Ten more arrive on turn three if weather conditions are favourable for landing, and on turn 16 - by which time they are very welcome - another five arrive. All player units start offshore and are positioned at one of the seven beach-heads, which are arranged around three main points, thus making a three-pronged attack possible.

The computer automatically deals with each of the player's units in turn during the action phase. On a unit's first turn, it can both land and then move or attack; on subsequent turns it can move or attack. Characteristic of the Okinawa-style games is the way the player selects which enemy unit to attack: the computer highlights the nearest possibility and asks whether it is the target. On a negative response, it goes to the next nearest. It will happily go through all the enemy units visible on the screen, paying no attention at all to the range of the attacker.

This is frustrating, because if you attempt to attack a unit out of firing range the unit loses its turn; and it's easy to hit the joystick button and attack by mistake.

An information panel at the top of the screen describes the unit currently in use, giving its name, its firing range, its movement range, its defence factor and its aggression factor.

Sitting on top of a minefield or being up a mountain increases the defence factor, making it more difficult for enemies to harm the unit. The aggression factor is an indication of how effectively the unit can fight, and it's reduced in combat - when it reaches zero, the unit is elimated.

You can't examine enemy units at all, but when you decide to attack one all its values appear in a similar panel at the bottom of the screen. During combat - which, like movement, occurs instantaneously - you can watch the aggression factor of both units go down.

The Japanese are equipped only with infantry and artillery, so if you range tanks against their man and pillboxes they can't shoot back.

But the Allies' major weapon is the gunship line, which hovers offshore and rains naval gunfire on any part of the island. After making an ordinary attack with a land unit, the player can - in the early turns of the game, at least - have a go with the big guns. And in the early turns naval fire effectively provides two attacks per turn on every enemy unit.

It seems wise not to bother restraining your naval fire, as it's quickly eroded by enemy action anyway - at the end of each turn the player has to watch, powerless, as submarines stalk the gunships and planes attack them.

It's difficult to play a strategy in Okinawa simply because the Japanese forces remain so well hidden in what's presumably the island's thick jungle, and since the victory conditions declare that the Allies must eliminate all Japanese forces on the island it's necessary to search every corner of the map. All you can do is send units off hopefully in random directions and keep them moving until they fall over a Japanese division. It then makes sense to stop and shoot, and, if your unit survives, to carry on blindly in search of the next victim.

And the obvious broad approach - a three-pronged assault - is suggested by the fixed beach-heads. Little scope remains for the strategic imagination of the player.

The units appear as tiny and indistinct counters on a background visually identical to Iwo Jima and the Falklands in PSS's other similar games. And on a less-than-perfect colour TV it's difficult to make out which side each unit belongs to - only colour distinguishes them.

The straightforward, unadorned nature of Okinawa may appeal to some players, and the eight difficulty levels provide a progressive long-term challenge. But anyone who has Falklands '82 or Iwo Jima will find nothing new in Okinawa.

It's not unplayable; you can spent a happily diverted afternoon rooting out the Japanese and watching your gunships being bombed. And the £4.99 cassette version is reasonably good value for someone who particularly likes the previous games from the same mould, or hasn't got either of them.

Okinawa is also on PSS's compilation Conflicts 2, where it can be had with Battle For Midway and Iwo Jima for £12.99 on cassette or £17.99 on disk.

Authenticity 70% Launching surprise attacks on enemy units in the undergrowth is atmospheric convincing, though I'm beginning to think every island campaign was conduced along identical lines! 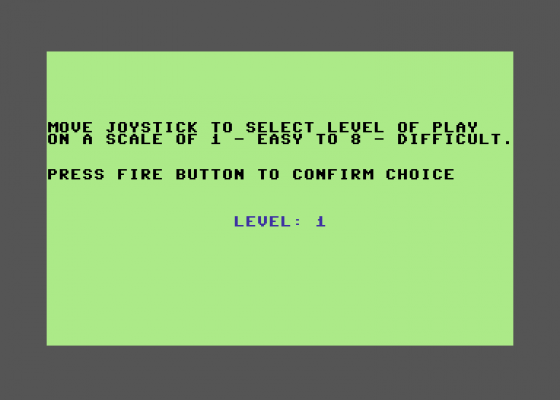