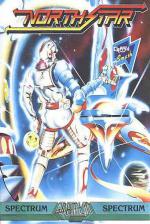 Isn't clairvoyance a wonderful thing? I mean, isn't it amazing how the people who write the dodgy storylines on cassette boxes can tell us exactly what will happen in, say, 500 years' time. Funny too, how they always say the same sort of things. For example, in the year 2499, a huge space station is going to be built. But, just as it is about to be completed something will go drastically wrong (again). An alien force will take over (again) and this one little robot fellow will be sent up to conquer the aliens (again). Sounds like a lot of fun, eh? Guess you know what's coming next. Guess what? You're going to be that little robot.

Yes, in Northstar, you get to play a little robot who has to destroy a whole alien force. Why a robot? Well, there's no oxygen out there, so a human wouldn't survive 5 minutes. Inferior races, eh? (Why do I keep using the word, eh, eh?) You are armed with a grabby arm kind of thing, a little like the club in Rygar. With it you can destroy the aliens as well as opening pods that contain extra points or weapons such as smart bombs. I tell you, you need them, things can get pretty hectic. And talking of pretty, the game is. Very pretty. The graphics are clear and large, and the animation is quite good, as is the scrolling. Colour is used badly, though. In Spectrum terms, that means that a lot has been used in large lumps with very little thought. The attribute clash is appalling and the enemy are practically invisible when you see them walk in front of something yellow. Tut tut.