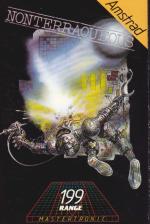 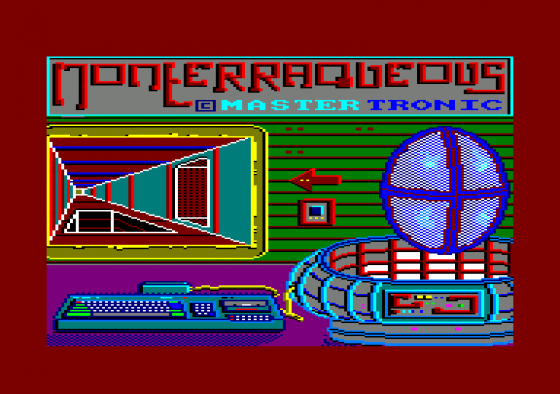 'Not of the earth or the sea' is how the title is explained, which is about as much sense as you'll get when you're controlling a robot 'seeker' around a futuristic 1,000 screens. Your task is to find a computer base which you have to destroy. Needless to say this will involve traversing most of the screens and completing a number of tasks.

The screens are composed of three types of border with open ends where you can move onto another one. Within each screen are a number of static bits of machinery and several types of moving robots. These can drain your psyche - your energy - although some are more harmful then others. Screens with a single humming object are dangerous while ones with three objects or just blocks are fairly harmless, draining only a little through collisions.

Your seeker can take two forms, one which shoots and one which doesn't. You change between these at SWOP machines. When in shoot mode you can destroy the "hammers' that appear in threes on screen. In either mode you can pick up psyche energy from some static objects or pick up a bomb or other object. 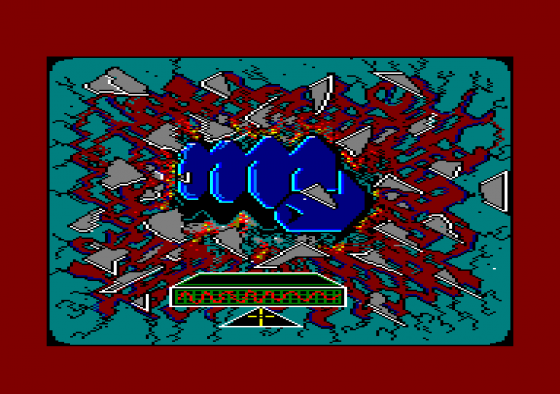 The two main other dangers are photon thrusters and force field beams. Thrusters oscillate from the edges of screens and are instantly fatal to you so you have to move onto screens carefully so as not to run headlong into one. Force fields appear across a screen and the only way to get past them is to explode a bomb which can also kill you if you're too close when it goes off.

All the borders and objects are done in detailed multi-colour and look very good. Things get particularly colourful when you start shooting your ever-changing laser beam. If you die you're told the reason why so you'll know what to avoid next time. Loading is a little odd with two excellent loading screens but one coming up at the very end of loading for only a couple of seconds in its complete form.

1. Over 1,000 screens. 2. Detailed, colourful graphics. 3. Lots of shooting and avoiding. 4. Brainwork required to solve puzzles. 5. A steal at this price.

1. As with all BIG games, screens become samey. 2. One careless slip into a photon thruster can end a lot of hard work.

Excellent graphics - indeed, excellent everything - for a cheapo game. At 1,000 screens you're going to find it's not just your robot's psyche that gets drained. Extra class is added by Mastertronic's multi-lingual instructions and the faint warble of Bach on the speaker. A French Suite, I think. Or was it one of the English? Do let us know if you can tell.

At 1,000 screens you're going to find it's not just your robot's psyche that gets drained. 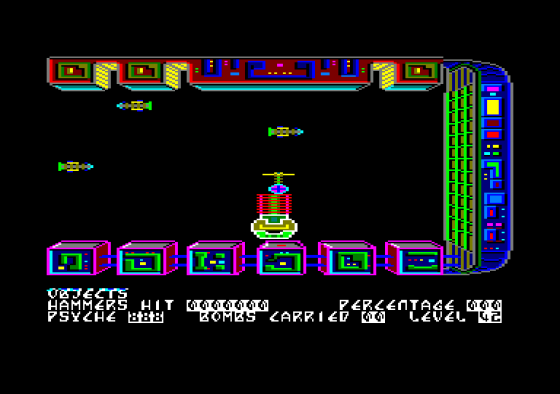 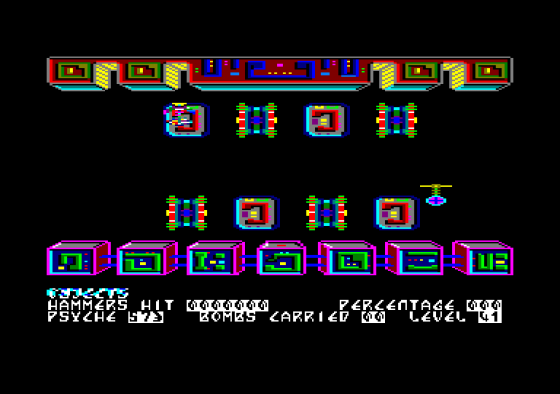