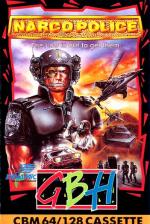 If you want to know the time, don't ask these policemen, you're likely to get your head blown off. They're so 'ard they don't eat three Shredded Wheat for breakfast, they scoff the whole box (chew that cardboard, yum yum). Mark "Nick Nick" Caswell sticks a blue light on his bonce as he chases the bad guys.

In the year 2003, over one fifth of the planet's population will be addicted to narcotics, thus the power of the drug dealers will increase beyond measure. But there's a silver lining to this particular black cloud: all the nations of the world have banded together and sent their best two policemen to serve in an elite anti-drugs force called the Narco Police.

Five years of training and preparation are about to come together in the biggest drugs bust ever. The location of the drug dealers, known as the 'Narco Processing Centre', is a small island off the coast of Colombia. So the rozzers head off to kick some drug-producer ass. But not before loading up with plenty of ordnance, and rest assured there's a fair bit to choose from. There's two types of bullets, three different missiles, some vital demolition equipment, a medical kit, teleport system and a bulletproof vest. So choose well and prepare to send your three teams into the fray... and Gawd help the drug dealers.

Once you've locked and loaded, a map of the island appears, enabling a choice of five tunnels leading into the base - though this is pointless presentation as they all look and play the same. You control each member of the teams as they travel through dark and dank passages, searching for the Central Processing Laboratory (ahh, that's why they carry the explosives).

The drug dealers ain't going to let your lads ruin their day, so they send their own troops to wipe out the intruders. Be wary 'coz ammo is limited, so choose your targets carefully and wait until you see the whites of their eyes (unless they're tightly shut).

The risk here, of course, is death by lead poisoning, but this is where both the flak jacket and medical kits come in handy. Also you can use the Personal Intercom Unit to swap between teams, fire missiles, use the medical kit, set explosives etc. Hurry up, you haven't got all day to reach your target and blow it sky high.

You'll all know by now that I'm a closet psycho who enjoys nothing more than a bit of computerised violence, and Narco Police delivers it in spades. The bullets certainly fly around: even in the safety of your own home, a brown-trouser attack was never quite so assured. But after a few more plays, Narco Police is great fun. Graphically the game's good, some of the sprites are a tad porky but I'm sure we can forgive that. A budget price tag assures that Narco Police is worth purchasing.

I enjoy nothing more than a bit of computerised violence, and Narco Police delivers it in spades. At a budget price tag, it's definitely worth purchasing.