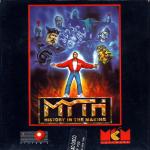 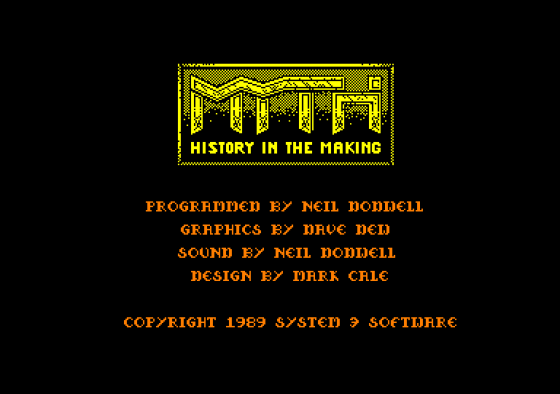 So you've read all the books, right? You know all about the devils and demons of ages past, but they weren't real! Were they...?

Dameron, principal nasty in a sky chock-full of evil deities, has taken over time itself. He's unable to influence the future - that much was laid down at the dawn of man, when the gods diced for control of the elements. He can, however, in the best Marty McFly manner, change the future by simply altering the past. 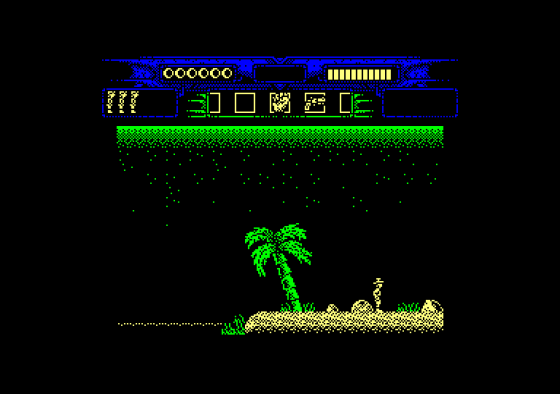 Gods cannot change their alignment either - good lords are only able to do good deeds. But Dameron has found a theological loophole here too, and has convinced the gods that evil is in fact good and now threatens not only your life, but every life that was ever destined to be for the rest of time.

The few remaining forces of good have selected you to be their champion and right the wrongs of Dameron. Only a mortal can do this, and only you have the necessary knowledge of mythology to succeed. It's going to be tough battle fighting the gods themselves, but this is the stuff dreams are made of. This is a Myth, truly history itself in the making.

You're transported to the first time zone - and it's Hell - or at least the road to it! You must find and collect five orbs that will give you the power to overcome Dameron's evil and further your quest. Act fast - you're on a mission from god! 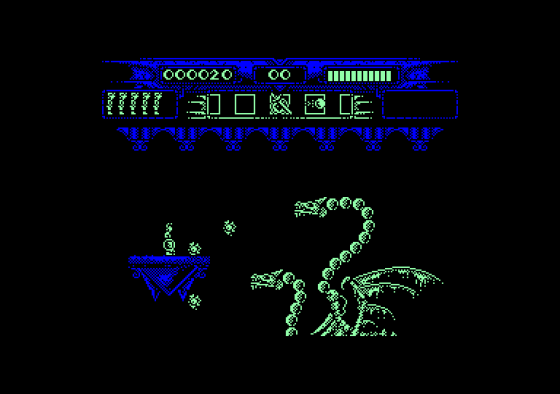 The world is one of platforms, floating rocks and caves that you can leap about looking for clues. An arcade adventure, the primary task is finding some weapons to protect yourself from the obviously vicious creatures of the pit.

Flexing your muscles, you can leap, walk and run. Boxes, chests and other containers can be kicked open, revealing items that can be collected and stored for use at a later date. So look hard and use carefully. Fireballs and energy are the most urgent requirement, so that you've got some-thing to kill with and to live on! You can attack zombies and creatures of the night with your bare hands, but it isn't really a viable proposition.

Hell is a hot and fiery vision. Skeletal dead stalk the corridors hunting you. corpses of the damned hang in torment from nooses eager to drain your energy so that you join their ranks. Wiping out skeletons with fireballs has the curious effect of leaving skulls to collect.

You may not instantly know why, but the good gods are giving you all the help they can, so don't ask questions!

Fiery gargoyles sit guarding the most obvious orbs, but these take some getting. Others are in apparently unobtainable positions. Good strategy and experimentation will eventually yield results. Remember, every item has a use and every monster a weakness!

Hellfire and brimstone bubble and boil, sapping your energy if you stand in the wrong place for too long. Swinging corpses rock gently when touched, while huge devils guard the artifacts you seek. Beware demon-fire - it kills! Every step you take may be your last if you don't know exactly where you're going and on what you'll land.

Success transports you from the land of Dante to the world of ancient Greece. Now you must face the titans, whose fame Homer sang: Medusa, Hydra and friends. More benign gods than those of Hades live here, and if you act bravely and courteously, there's a chance to recoup some of your lives. There is also greater danger.

Again, you seek five orbs, orbs that when used with a master icon will take you to the next world. The risks involve instant death by petrification, more fire-baths and a beautiful lady who also happens to be as fickle as the English climate!

Here you're armed with a sword and shield, so you shouldn't feel naked even when facing "old snake head". Swing your blade into everything - even the scenery - to find those hidden treasures. They won't make you rich, but may well save your soul.

Complete this level and you face the might of the Norse gods Odin and Thor, in a land littered with trolls and wraiths. You start by battling against vikings on the prow of a dragon ship that's sailing into the teeth of a gale. The Norse gods must be defeated and made to realise the error of their ways.

After a showdown with the father of the gods, Odin, you will find that the final and most perilous adventure is yet to follow, in the trap-filled world of ancient Egypt.

In the land of the Pharaohs, all is definitely not what it seems. Every paving stone may spring a trap that will crush, poison or behead you (possibly all three). King Tut must be raised from the grave and then killed - a bit pointless, but effective.

The puzzles - principally finding out what each item you find actually does - get ever more difficult. The dangers are increasingly terminal. Make the most of any lives gained on the Greek level and the credit feature if you want to stand any chance of getting into the final face-to-face beef with Dameron, the god who caused all the trouble m the first place.

As an arcade adventure, Myth is unsurpassed. It has depth and cunning gameplay. subtly blending joystick speed with grey matter power to a near perfect degree. Luck and guesswork become integral to your success.

Using an icon system means you have a variety of options at all times, in terms of what to do and how to do it. A little clumsy at first, the pause taken while you select objects/actions with space bar and joystick often gives you the vital time needed to think out a problem and to second-guess the programmers.

Graphically, the choice couldn't have been a better one. Small, bold sprites are used in single colours, thus avoiding clashes and making all things clear at all times. Wit and humour is readily apparent in the animation, with the transforming woman's hair waving, wraiths diving into the ground and skeletons that look like extras from a fantasy B-movie.

The sound effects are varied and interesting. The overall impression of the game is helped by the huge monsters. Some are pretty immobile, and all are as impressive as they are deadly.

Myth feels full. It's detailed and challenging, a game constructed by gamesplayers for gamesplayers. Care is taken at every turn to impress and confuse would-be heroes. The gods of ages past are waking and their rumblings are the stuff legends are made of

An epic adventure that is sure to keep you playing for many moons to come. Clearly ported straight over from the Spectrum but - for once - none the worse for it.

Gets a teensy bit dark in places.

Finish the Road to Hell

Overall 94%
An arcade adventure that will go down in legend.

An arcade adventure that will go down in legend. Clearly ported straight over from the Spectrum but - for once - none the worse for it. 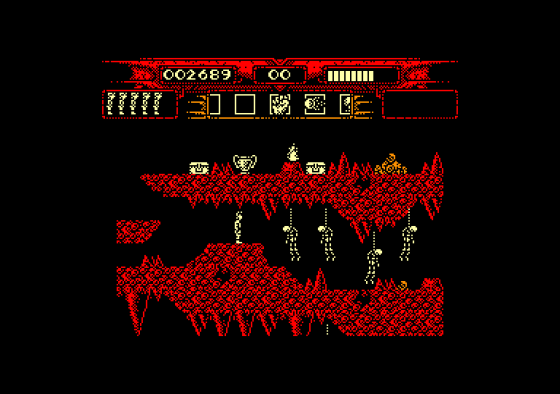