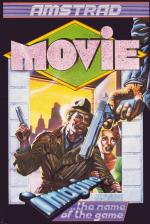 Remember all those private detectives in Hollywood movies that wore dirty rain-coats, couldn't talk properly, drank like fishes and enjoyed shooting bad guys? For all budding Humphrey Bogarts that is what this game - programmed by the same people who produced the Amstrad Action Christmas games Kung Fu and Number 1 - tries to recreate.

You play the starring role of Jack Marlow. The mission he has undertaken is to recover a tape recording from the gangster Bugs Malloy. The tape is tucked away somewhere in the game which is composed of 3D rooms connected by doorways and corridors and inhabited by many characters both friend and foe. Marlow walks rather slowly around these rooms in his long mac and Dynasty shoulder pads in search of something to do.

The rooms for the most part aren't very colourful but many of them have lots of well drawn furniture that can be moved around. Unfortunately you can't manipulate it in the same style as Get Dexter or Batman but just have to admire it or push it out of the way. This is because there is no jumping - presumably it's not Marlow's style.

The other characters consist mostly of men clad in similar long raincoats to yourself, many of whom work for Bugs Malloy and will try to stop you. This they can do by shooting Marlow or punching his lights out. Marlow can do the same to them but has to find guns and preserve the limited supply of bullets. Marlow only gets one life so one careless slip and he's in for the big sleep.

There are other dangers with whom contact can mean instant death - they make the surroundings more like a haunted house. There are suits of armour (some of which move of their own accord), bouncing dogs (!?) and bouncing balls. These defences have to be avoided and can cause an equally frustrating end to a game as a bullet in the back.

To complete his task Marlow has to find a girl, Tanya, who will lead him to the tape and provide other invaluable assistance. However, she is pretty tough to find in the first place and has a twin sister who will lead you into the hands of the gangsters. She's also animated rather oddly making her look distinctly deformed and anorexic.

Movement and action in the game are controlled by an icon system in which a symbol floats between icons. There are commands to drop, pick up (objects not girls), shoot, walk, talk, punch and throw. Some of these are entertaining and indeed useful but the major problem is that they take too long to select within the context of the game. Thus you can't walk and do something else at the same time. This drawback makes particular areas of the game extremely difficult and frustrating.

The talk action is perhaps the most interesting, allowing you to type speech into a speech bubble and communicate with other characters in the game - ever tried talking to a parrot? Unfortunately this idea also doesn't seem to have been developed to the full and there aren't enough possibilities for having intelligent exchanges as in an adventure game.

There are various objects to be found in the game like guns, bottles and bombs but again their use is limited and there don't appear to be enough puzzles involving them to keep you interested. It's certainly an interesting project that took steps in the right direction but fails on the gameplay side to provide enough to get you really hooked.

You could really make an interesting game out of the Bogart setting, but Movie isn't it. It's pretty enough at first, but the dreadful gameplay and clumsy controls soon become apparent. If you like grenades that go "BOOM!"- literally - then the game may still have something for you, but there's better art deco in Batman.

Perfectly playable - in fact, it gains quite a bit of atmosphere.