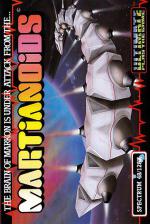 Martianoids is a neat notion for a game, despite its name. Your role as Guardian of the Brain of Markon is to care and stimulate it, and ultimately to protect it on its 1000 year trip aboard the robot ship Markon Dawn in its quest for new galactic life forms.

Trouble is, the life forms it's found are aggressive critters called Martianoids who've got into Markon's Brain and are chewing up its vital bits.

The Ultimate solution is to locate the program for each brain sector and guide it from the relevant transmitter to the appropriate receiver. This will activate the brain elements and make it safe from further attack.

To help you, the screen is split in two. One half is a nicely realised 3D image of the brain section you're in, and the other is a flat plan of Markon, divided into nine sectors. Here you can plot your position relative to that of the program you're collecting, while each section will flash according to its status - white for activated, red/yellow if under attack and red if destroyed.

In the 3D image you have to charge around the maze of the brain's circuit board, finding batteries to keep yourself charged, Martianoids to mash and the route to the program.

The nice clear graphics, the length of gameplay and the brain-as-computer idea are the game's strengths.

Its weaknesses are a complete lack of thrills in presentation - it's been designed with about as much imagination as a caravan site!

The nice clear graphics, the length of gameplay and the brain-as-computer idea are the game's strengths.