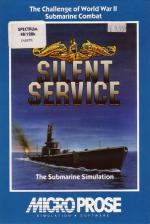 Dive! Dive! Dive! Here's a game to play in the bath! This submarine simulation is a great war game but for serious gamers only. If you're the sort to be put off by a suggestion to read one or two books on submarine warfare, then the game isn't for you either, as this is just what Microprose warns you to do. Silent Service comes with two huge sheets of information to drown you in facts though the actual game is fairly simple. You must navigate your American sub across the Pacific, find a Japanese convoy, single out and sink your target, then beat a hasty retreat.

What gives the game its subtlety is the huge number of game options and variations to choose from. There are four skill levels - ranging from hard to totally impossible on my rating - and there are seven reality options so that you can make each game totally different. These include limited visibility, manoeuvrability of the enemy or dud torpedoes on your sub. Finally, you can choose between three game scenarios - torpedo or gun practise, convoy actions and war patrol.

Multiple screens aid your attacks. Map, visual, sonar and radar locations appear on one, while others give you periscope/binocular views, the conning tower, bridge, instruments and damage control. You can suffer from overkill on the information front, but it does seem like the real thing.