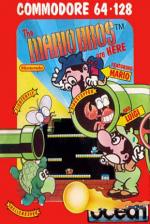 Meet Mario and Luigi - the Mario Brothers - two whacky workmen dedicated to maintaining the cleanliness of a pipe network. A conversion of the ageing Nintendo arcade game, this Ocean release allows one or two players to undertake the brothers' gruelling task.

The action takes place on a single platform-filled screen. Creatures appear from the two pipes at the top of the screen and proceed to make their way down to the bottom. It's up to Mario and Luigi to dispose of them.

Pressing the Fire button makes the brother jump - and more importantly punch. Hitting a creature from below as it trundles across a platform flips it onto its back, allowing it to be kicked off. Turtles and Flies need only be hit once, whereas crabs require two hits to flip them onto their backs. Flies are more awkward to flip through, as they jump rather than scamper across the screen. If a creature is not kicked off after being flipped, it slowly rights itself and continues its journey, faster and more aggressive than before.

Fireballs roar across the screen at regular intervals, roasting any brother in their path and disappearing off the other side. Coins also drop from the pipes, earning 800 points when collected or punched.

The 'POW' marker at the bottom of the screen makes life a little easier for the chummy brothers. Hitting the monogrammed box jolts the whole screen and causes its entire menagerie to flip over, however this is only good for three hits.

The third level is a bonus screen where the POW marker is refreshed and coins are collected to earn extra points. There are no creatures to dispose of, but a 20 second time limit is imposed - so speed is of the essence. Similar Bonus screens appear at regular intervals.

Ignore the awful loading screen - the graphics do get better. However, control of the brothers is very fiddly as they keep moving even when the joystick is central, and it's quite tricky to get them dead still.

The fact that you can also jump through the ends of the platforms is a pain, especially when you intended bumping a turtle, and he gets you instead. Fans of the arcade version may be a little disappointed, but otherwise this will suffice until you can afford a second-hand arcade machine or a Nintendo!

I was initially extremely annoyed that this conversion doesn't look as good or play as well as the original - and as far as I can see, it should have done.

However, perseverence paid off and, despite suffering at the hands of a new unnecessarily frustrating elements such as the control mode (I'm sure Mario didn't keep running in the original!), I eventually found myself enjoying the proceedings.

The two-player game isn't as much fun though, which is sad, as playing with and/or against a second player was what made the original so good.

Disappointing but enjoyable enough if you give it a chance.

I was expecting this to be something really special, but when I played it I came away disappointed.

The fundamental elements of the original are still there, but the conversion just doesn't play right. I don't like the way that the sprite keeps running when you let go of the joystick, and I'm sure that the character's skid is a little excessive.

The graphics are also disappointing - the original Mario, Luigi and monsters had plenty of character, but this has been sadly lost in the conversion.

Mario Bros is fun as a two-player game, but I don't think there's enough in it to keep a single player engrossed for longer than a few hours.

Presentation 62%
Generally shoddy, with poor loading and title screens, and no restart or pause - however, there is a two-player option.

Hookability 65%
Addictive, if a little frustrating due to the control method.

Lastability 51%
Quite tedious - only the two-player option provides any lasting interest.

Value For Money 52%
Fair, although playing the arcade version 40 times would be just as rewarding.

Overall 55%
Fun, but sadly not as playable as the original arcade.

Fun, but sadly not as playable as the original arcade.