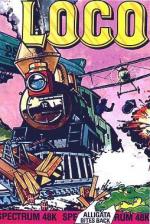 A steam-train journey is rudely interrupted by the outbreak of war, and the locomotive is in deadly danger. Taking the controls, it 's up to you to guide the engine along a five-track railway, avoiding hazards and trying to hang on to your three lives for as long as possible.

The main screen gives a side view of the train as it progresses, with the background scrolling from right to left at a constant rate. Enemy planes zoom in for a low-level pass, emptying their payload of bombs in your direction. Runaway carts rumble down the track towards the loco and explode on contact, while airships hover in the sky attempting to drop bombs onto the roof of the engine. Evasive action is out of the question - the screen scroll forces the pace.

Trouble was obviously anticipated by the railway company, as the locomotive is not defenceless. Puffs of smoke can be released from the smoke stack to destroy falling bombs or blind enemy pilots, while the explosive trucks can be destroyed by firing blasts of steam from the front of the engine. Points are awarded for dealing death to the enemy and for blowing up trucks. A long-range radar display occupies the bottom of the screen, and warns of dangers lurking further along the track.

The fuel available is monitored on a bar to the right of the screen: the engine loses steam and grinds to a halt when the coal runs out, becoming a defenceless target. Coal dumps are scattered around the network of sidings, and it's possible to change the points and move onto a branch line to pick up supplies when you come to a junction.

'A mindless shoot 'em up no less - goody! Loco is the sort of game that will get loaded up, played for hours, and then never played again. The gameplay is compelling at first but appeal dwindles into apathy after a relatively short time. The graphics are simplistic but effective - the screen scrolls in half characters so it jerks a bit and the use of colour is dubious. The sound is also on the minimal side: the odd effect is all that is on offer. For the price, you could do a lot worse than buy this!'

'This game is so playable. I can't believe it! Okay, so the game is a bit dated amongst the Top Guns and Gauntlets of today - but there's no denying the fact that Loco is great fun to play ... for a while. The backgrounds are well drawn, but they don't change much and lack colour. The map at the bottom of the screen is a good idea, but can get out of synchronization with what is really happening above it. I would say that Loco is a brilliant game for the age range of 9-13, but anybody older than that would get bored fairly quickly.'

'Loco is boring. The graphics are average, and the whole thing isn't much fun at all. The price, although only a few quid, is too much. Loco doesn't look like much or play like much. The title screen picture is neat, but then again, that hardly makes up for the fact that the game isn't very good. A very simple idea, but one that's far too simple to make an interesting game. Not recommended.'

A very simple idea, but one that's far too simple to make an interesting game.