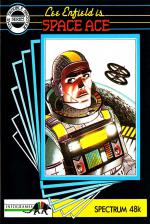 If I were Ben Elton, I could do an extremely involved review, building up to the climax, being thoroughly witty and closely observed, generally leaving the reader in a state of admiration, and rounding off with a terse little comment which would leave the reader thinking, "she's absolutely right>"

But I'm not Ben Elton, so I'm just going to have to give you the low-down, brass tacks on Lee Enfield, Space Ace, from Infogrames.

Lee Enfield (don't ask me who his is, I've no idea), is presumably the guy behind the gun sight which features on the screen. His task (again, I presume) is to demolish anything of a slightly alien bent which happens to come across his path. He does this thing in smart, highly-detailed monochrome, and looks tremendously impressive whilst he's doing it. Well you can see that, just out the graphics on this page.

So if the world were a fair place (which, as Ben is constantly reminding us, it is not), Lee Enfield, which looks absolutely fabby, should the most entertaining game in the world. Sad to say it's not. That's not to say it's a bad game, it's fairly entertaining in a 'target practice' sort of way. What happens is this.

Lee Enfield, the man, is presumably behind the gun sight which appears and roves around the screen. The small arrow which you can see at the bottom of the screen will change direction from time to time, to tell you where the next enemy is about to spring from. Keep a close eye on the arrow and you can't go far wrong. Only problem is, the gun sight seems to keep wandering off, and I was never quite sure if the game was just playing itself for a bit of a larf.

Aliens pop up thick and fast, and can range from little ships which just hang around, to what seems to be a yak-like sort of creature which dies in a truly spectacular flop.

If you just want to bone up a little on your aim, then Lee Enfield, Space Ace is probably a good bet. It's certainly fast and slick, and offers you a bewildering variety of aliens to splurge. However, if you require a tad more variety in your games, then you're going to be disappointed, because you won't find it here. Either way you'll love the graphics, which really are some of the nicest that I've ever seen on a Spectrum. If only Infogrames could just pep up the gameplay content and variety slightly more, then they'd really become a force to reckon with within the software world.

Very attractive target practice game. Could do with a little extra 'pep' in the gameplay department.

Very attractive target practice game. Could do with a little extra 'pep' in the gameplay department.