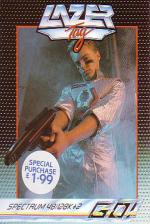 Now, we all know that the public image of the typical computer user is a small, spotty youth in an anorak and tatty trainers, hunched in a semi-darkened room trying to blast the last space pixie on level 99 of Alien Brain Gobblers at one o'clock in the morning. But you're not like that, are you? (Cries of "I am, I am!" - shut up, Dillon.)

No, the real computer user is a tough, macho type who enjoys healthy physical exertion and getting duffed around a bit, 'cos it's all very character developing. So answer me this; what IS the point of taking an exciting, energetic game like Lazer Tag, which encourages you to get plenty of fresh air and exercise, and turning it into a spotty, pasty-faced computer game?

Not that the game doesn't capture the spirit of the original, which, as you'll remember, involves jamming on big plastic helmets, light sensors and bandoliers, and racing around shooting light-pistols at each other or at robot targets.

In the game, you take the role of a lowly cadet at the Lazer Tag Academy, whose aim is to progress through the ranks so that you don't have to spend your free time cleaning other people's boots. To do this you must demonstrate your proficiency at two disciplines; Rabbitoid, a free-for-all shooting contest, and Target, a test of accuracy and skill.

In each game, you move through the lazer Tag arena, shown in a top-down perspective view with disappointingly little colour or detail. Your hero must blast the opposition as they emerge from cover. At this, they throw up their hands in horror and scuttle off the screen; no-one gets killed, remember, 'cos this is all very right on and socially conscious and not at all violent.

In Target, you progress under computer control, and aim your gun manually to zap as many targets as you can along the way. Shooting spinning mirrors can increase your firepower by twice or four times, as ricochets zip around the arena. In both games, you're playing against a timer, and are awarded bonus points for speed and number of targets hit. You lose one of your six lives every time you are shot or run out of time.

Technically competent, Lazer Tag misses out on any sort of exciting or involving gameplay. A perfect example of the sort of licensing deal which, I'm afraid, gives licensing deals a bad name.

Unexciting blasting game based on the popular light-gun package.

Unexciting blasting game based on the popular light-gun package.