Published in Your Sinclair #70 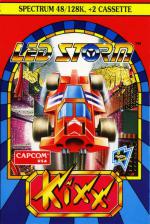 An arcade conversion from a year or two back (with a name like that what else could it be?), LED Storm is a futuristic race game with a difference. Instead of Out Run 3D, it's an overhead scroller. it's slick and smooth with crisp, clean graphics, but the real attraction is the speed - this game is faster than an eight-legged cheetah with aerodynamic styling. Racing flat out over the nine levels, swerving between petrol tankers and leaping spectacular gaps in the road is a pretty exhilarating experience!

Unfortunately, there are a few problems. For one thing, the collision detection is weighted in favour of the bad guys. You can eliminate them (by leaping on top of them!) but if you're caught in a pack then you'll be flung around more than MC Hammer's knees. More frustratingly, there's an energy system instead of lives. Consequently you're tempted to play recklessly (a case of 'full speed ahead and damn the killer joggers!'). Grabbing the vital energy icons themselves is a bit tricky - if the dreaded Black Car hasn't run them down, the twists of the track often mean they scroll offscreen before you can reach them. A tad unfair, methinks.

So, to sum up, LED Storm is a spiffy game that's just a leetle too tough for its own good. If you can handle running out of energy three feet from the checkpoint though it's a game well worth investing the coins in . As a simulation of superfast racing it couldn't be more complete if you set fire to a couple of tyres and bound some dead insects off your nose. [Eh? - Ed].

A spiffy game that's just a little too tough for its own good.