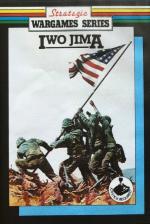 If you've ever wondered what it's like to leap out of a landing craft, charge up a sandy beach and hack your way through thick jungle, never knowing when you've going to blunder into some violent enemy yelling 'Banzai!', then PSS's latest wargame, Iwo Jima, probably isn't for you.

On the other hand, if you're looking for a decent strategy game which is going to test your military capabilities, then it probably won't be your cup of tea either.

It's not that Iwo Jima is a bad game as such - the implementation is really pretty good - it's just that there's nothing very inspiring about it. Just like the original battle, in which the US marine corp suffered hideous casualties invading the Pacific island heavily fortified by the Japanese, it's sheer unrelenting slog.

The playing area is about 60 characters by 25, and shows the island and surrounding waters. Water is blue (surprise!), scrubland is yellow, mountains are green and airfields are purple; also marked on the map are villages, quarries and minefields.

At the beginning of the game, you choose one of five levels: easy, moderate, hard, difficult or masochistic.

In the first turn you have to land ten units, each of which can be put ashore on any one of five invasion beaches. Your troops - the marines - are white squares with black symbols indicating type. To begin with, you have eight infantry units and two of tanks, but later you also get some artillery.

To order your troops, you either use a joystick or the 1, 2 and 3 keys. Left/right and 1 or 3 cycle through the various orders you can give your units, and fire or 2 actually commits you to doing something. Orders are Attack, Move or Pass (and at certain times, Land.) if you Move, the computer asks you in which direction, until the unit has used its movement allowance or you choose to have it stop. Tanks move further than infantry and artillery, and terrain is taken into account.

Once you've landed, some - but not all - of the Japanese forces will be revealed, either because your troops can see them or because the computer has decided to attack with them. Japanese land forces are shown in pink, and are either infantry, artillery, tanks or strongpoints. Some of them are very tough indeed.

All units on the board have an attack factor, a defence factor, a movement factor and a range as well as a unit identification. When a unit suffers damage, its attack factor is reduced: when it reaches zero, it ceases to exist.

If you order one of your units to attack, the computer will pick a Japanese unit in range and start flashing it in inverse video, at the same time asking if this is the unit you want to attack. Be careful as it's quite happy to ask you if you want to attack a unit and then, when you say yes, tell you it's out of range - which means that your unit loses its turn.

Unfortunately, the Japanese have bombers which attack your ships; although they are eventually shot down, they can damage your battleships and make them less effective. Similarly, there is a Japanese submarine which pops up and sinks your gunships. What's more, if it's stormy and the seas are rough, you can't land troops or use your gunships.

So far I've beaten the computer on the easy level, but got slaughtered on Level 3. To be quite honest, though, I wasn't really that fussed. I don't think I'll be taking my holidays on Iwo Jima.

A competent, if old fashioned, piece of programming, but the game just fails to excite.

A competent, if old fashioned, piece of programming, but the game just fails to excite.