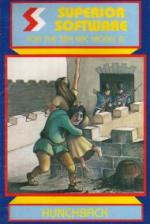 The surge in home micro sales is due in part to implementation of arcade games on the micro. One such game is Hunchback, which is as good a copy as you could expect. Superior Software sells the game under licence from Ocean, who originally wrote the game on the Commodore, and the Beeb version is near perfect.

The object of the game is for the hunchback Quasimodo to rescue Esmerelda from a castle tower. To reach her, he has to get past a series of obstructions, so we find the Hunchback jumping across the ramparts or leaping Tarzan-style onto a swinging rope to reach the other side.

To make life more difficult as the game progresses, guards with spears appear, and boulders and arrows threaten our hero from both sides. The game has twelve different screens, though the setting is one of two basic types. The object within each is for Quasimodo to cross the screen from left to right to pull the bell rope on the right-hand side. The screens vary in their difficulty and the user can choose which screen to start from, and three different levels of play are available.

The sound effects are adequate but an option to turn them off is sadly missing. Unusually, and pleasantly, only three keys are used, and these are conveniently laid out for ease of use. The game can be played on keyboard or joysticks and includes a high score table.

The only fault with the software was the sideways scrolling across to the next screen, which fails dismally. The movement is very jerky.

That said, I thoroughly enjoyed Hunchback and I'm pleased that my local pub is no longer reaping the benefits of my addiction.

Other BBC Model B Game Reviews By Dee Vince

The Beeb version is near perfect.