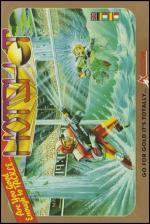 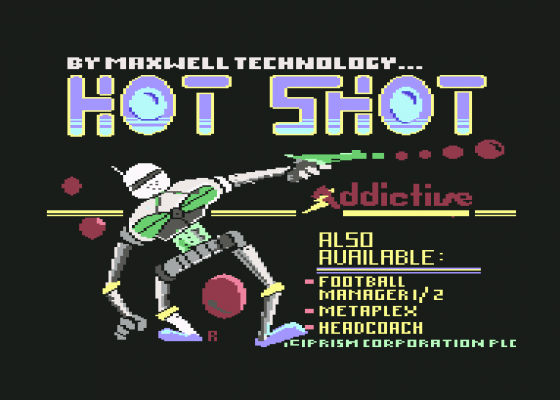 I'm all for original and innovative ideas - if the end result is an enjoyable and playable game. Hot Shot is certainly original, but unfortunately it's far from playable.

The game is very simple: it's a one-on-one battle between either two human players, or a human and computer player, set across five different levels. The objective is simple: beat the opponent. 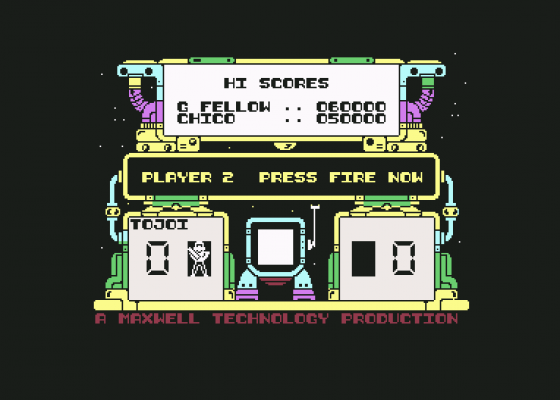 Before a game begins, each player enters his name and is assigned a character by the computer. Personally, I'd prefer to choose my own character, rather than be given one randomly.

The characters vary in shape and size, from roughly human shape to squat alien life-form, but in play there are very few noticeable differences between them.

If there isn't a second human player, the computer supplies an opponent. 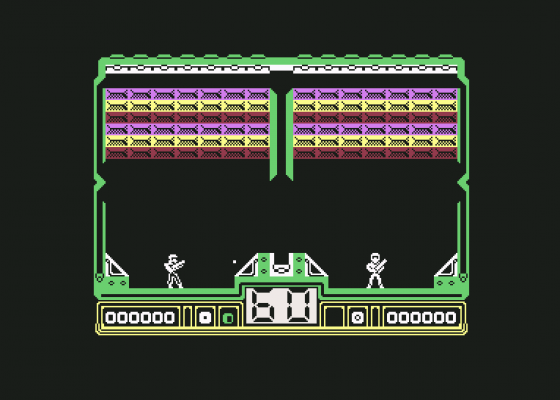 Level one looks very much like a Breakout game, as there's a large group of blocks at the top of the screen. The bottom of the screen is split into two halves, representing each character's playing area. A ball of antimatter is shot into the playing area, and the characters attempt to catch it and shoot it at the blocks, which earns points.

This sounds pretty straightforward, but there are two catches. Firstly, the players are only allowed to catch the ball using their 'gravitation guns' - long sticks. If the ball touches any other part of the character's body, he dissolves and points are given to the opposing player. Secondly, each character exerts a strange gravity force, which causes the ball to follow parabolic curves, making it very difficult to actually catch the ball.

The screen is played over a given period of time. When the clock runs down, both players go forward one at a time to tackle a pinball-style bonus screen. The character stands at the bottom of the screen and the ball ricochets around the screen. The objective is to score as many points as possible by shooting the pins in the centre of the screen. When the time limit expires, or the character gets hit by the ball, the bonus screen ends. 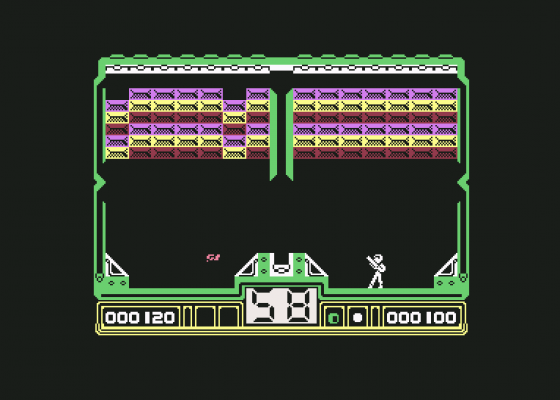 If the player has scored more than 4,000 points, he moves onto the next level. If not, the game ends.

Subsequent levels play very similarly, but involve such things as drowning your opponent by hitting enough bricks to raise the water level in his area, and doing a similar sort of thing with a black hole.

One of the game's big faults is the control method. Catching the ball is incredibly difficult due to the fiddly control method and weird gravity. The computer opponent is also very tough to beat, and frustration sets in very quickly.

Now, all this would be alright if the game was worth persevering with, but unfortunately it isn't. The gameplay just isn't exciting - even in two-player mode - and frustration soon gives way to boredom. Even if you do stick with it, there's only five levels of very similar action.

The graphics are very poor indeed, and look as though they've been copied directly from the Spectrum version.

To be perfectly honest, I don't think Hot Shot would make the grade even as a budget game. At ten pounds it's vastly overpriced. Avoid it at all costs.

Graphics and playability are terrible and I think this wouldn't even make the grade as a budget game. Avoid it at all costs.