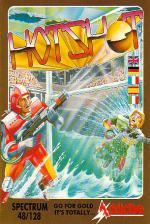 Hot Shot is certainly original but very strange. Get this: the game is said to be based on the sport of squash but set years into the future. In fact it plays like a cross between pinball and Breakout rather than squash. Players no longer use primitive racquets but graviton guns which work like vacuum cleaners to suck up the ball. Weird huh? Get's worse:

You control a character chosen randomly from a number of alien beings, some of which have strange nose-like tubes growing from their heads which act in the same way as the guns.

Level 1 is set in an arena containing coloured blocks destroyed Breakout-style by hitting them with the ball.

Combatants stand on opposite sides of the play area. Use your graviton gun to control the ball's movement and bounce it around the screen. Pressing fire activates the gun causing it to attract the ball; pressing fire again releases it. If the ball hits a character instead of a gun, he's blown to bits. The ball returns to the opponent's side of the screen.

When pressing fire, the gun can be pointed in any direction by moving the joystick. Without fire pressed, the player can run left and right as well as duck to avoid the ball.

If your score at the end of the given time limit is high enough, you progress to a bonus level containing pinball-style bumpers. Do well and you're granted access to the next level which is split into two giant pinball tables. Points are awarded for hitting bumpers. There's no time limit; instead each player has three lives.

Following another bonus level, you progress to the next stage and try drowning your opponent by hitting blue bricks to increase the water level in his area. In the final try and annihilate The Beast as an expanding and fatal black hole comes nearer and nearer.

David Jones of Spellbound and Stormbringer fame has changed tack with this one. How does it play? A bit tough really; the ball is hard to catch, although once the controls are mastered, the first level is easy. Following ones (supposedly different but really very similar) are extremely hard, and this high level of difficulty reduces the playability of an otherwise enjoyable game. If you're looking for something a bit different, though, Hot Shot could be worth a look.

'I found Hot Shot be fun at first, to though the novelty wore off after a while. Graphically, it's effective: opponents move move around the play area frantically trying to catch the ball springing wildly around the screen. I don't know whether the ball movement is supposed to be realistic, but considering the way it flits around the screen, I have serious doubts. The control method is awkward at the outset, with your man constantly being disintegrated by the annoyingly anarchic ball, but after a while, some semblance of control is established. Overall an enjoyable Breakout-ish game. Take a look.'

'Keep on your guard at all times, for not only does the ball come hurtling toward the unsuspecting player and kill him, the opposition can also fire the ball you! The graphics are bold and colourful with cute players called a variety of names from Killer to Triffid. There's a tune on the title screen and spot effects echo all through the game. The levels get more detailed and harder to play as you progress, which means that Hot Shot will keep you glued to your monitor for weeks to come. A thoroughly addictive game from Addictive Games.'

The levels get more detailed and harder to play as you progress, which means that Hot Shot will keep you glued to your monitor for weeks to come.