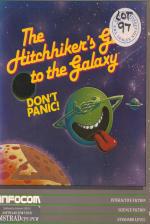 Hitchhiker's Guide To The Galaxy (Infocom) 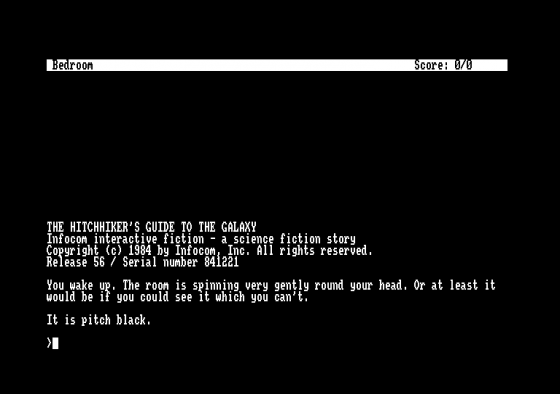 Hitchhiker's Guide To The Galaxy was received ecstatically when it first appeared on the Commodore 64 and hence made its way onto the British home micro scene. There can be hardly anyone reading this column who hasn't either heard the radio series or read the books by Douglas Adams. They must have made him a very rich man, and now they can make you a very amused Pilgrim.

Like most recent Infocom games, Hitchhikers comes in a very plush box with a little compartment at the back holding the disc and various other goodies. The goodies include a badge saying "Don't Panic!",a pair of Joo Janta 200 Super-Chromatic Peril-Sensitive Sunglasses, some fluff (presumably from your navel), your own Microscopic Space fleet (so small it's invisible), and destruct orders for your home and planet signed in triplicate by various local and interplanetary dignitaries. You also get no tea.

The game comes in two files. Hitchhik.com and Hitchhik.dat, and all you have to do is load up the disc under CP/M, type HITCHHIK and away you go. You play the role of Arthur Dent, anti-hero of the original story, and to begin with you find yourself inside your humble suburban home with a bulldozer descending on it intent on committing grievous architectural harm.

Although Hitchhiker's is text-only, like all Infocom games, the descriptions are nothing short of hilarious. Furthermore, the parser is out of this world. You can enter things like 'Marvin, who is Zaphod?' if you're getting confused (you will be) or 'Zaphod, what about the Vogons?' if you think Zaphod is being a bit cool about Vogons.

Furthermore, the program will always let you know exactly what's going on if you enter the wrong commands. The first six letters of each word are scanned. and if a word isn't understood the program will be quite clear about what the problem is. Since you've got a vocabulary of around a thousand words to play with, this isn't likely to be much of a problem, however.

Hitchhiker's is a tremendous game. It follows the original story in most details but even if you know the radio series backwards you're going to have difficulties. Trying to get a babel fish out of a babel fish dispenser was my first real problem. Every time a babel fish comes out, it shoots across the room and falls through a hole in the floor! So I tried blocking the hole, whereupon a floor-cleaning robot appeared from nowhere, grabbed the babel fish and disappeared with it! Aaaaaghghgh!!!

This game is more expensive than the others in the range, costing £24.95 as opposed to £19.95. It's still worth every penny, and it's not often that I say that about a game over fifteen quid, let alone one over twenty. This game could really force a number of British software houses to think twice about the sort of product they're putting out - otherwise they, too, will have to throw in the towel!

Hitchhiker's Guide To The Galaxy (Infocom)

This game could really force a number of British software houses to think twice about the sort of product they're putting out!