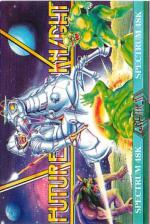 Future Knight has all the ingredients of a truly masterful arcade adventure.

It looks neat, complex and addictive.

And the storyline is intentionally simple so you can get straight on with the business in hand - playing the game.

Randolph (he's a hero), while having a quiet sit-down and a pint of best, is jarred back into consciousness by a message interstellar teletype. His heart-throb, Princess Amelia has been captured by aliens after her ship, the SS Rustbucket, crashed on a planet in the Zragg system. Seems like a tough break for her.

Every space-hero knows quite how impressive you can be while rescueing maidens from the clutches of evil slime-monsters and Randolph is no exception.

The graphics are very clean. While not boasting a whole lot of detail, they are nicely animated if a bit 'cutesty'.

You spend your time being bombarded by horribly unpleasant beasties of wide variety. Ghosts team up with flying saucers, and a whole host of other anti-social characters to give you a tough time.

Along the way, you'll discover numerous items which will help you on your mission. For example, the bomb will destroy every alien on the screen, and restores your constitution to maximum strength.

There is also a 'confuser', a handy little piece of equipment. Once you have one in your pudgy little suit-clad mitts, you can frazzle the aliens' intelligence - preventing them from posing all but the most abstract of threats.

Other items you can use are a 'bridge' spell, with which you can bridge gaps, an 'exit' pass, allowing you to use exits which may be locked and the 'platform' key which builds a platform.

At some points in the game, you'll find yourself confronted with a huge alien which wanders around in what looks like a 21st century walking frame, squishing anything in sight.

Obviously you're going to have to defend yourself and there's a selection of weapons - some prove more effective at certain times than others.

If you leave Randolph standing still for too long a period, he'll wave at you as incentive to get a move on. Leave him in the same spot for much longer and things start to get really desperate: Randolph will go completely berzerk, spinning round and round, flailing his arms and panicking in an astoundingly convincing manner.

Ignore him then and the chances are his constitution (shown at the bottom of the screen - maximum 999) will plummet at a tremendous rate.

The graphics are very smoothly animated, and Randolph waddles about the screen with a degree of fluidity equal to Gremlin's recent chart hit Jack the Nipper. Jumping around the playing area is easy to get the hang of, as you can generally reach just about any part of the screen with a good jump. All this, and you can fire in mid-air too.

Quality platforms and ladders with considerable scope for exploration. Entertaining enough to make you want to beat it.

Quality platforms and ladders with considerable scope for exploration. Entertaining enough to make you want to beat it.