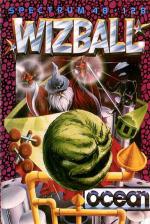 If you're looking for a cracking arcade style game with more inventive ideas than just about everything else around at the moment put together, Ocean's Wizball could be the business.

How to describe it? It's a complex left-right bouncing thing - with interlinking tunnels. It's as infuriating as any Ultimate game ever was - to start with you haven't a clue what's going on.

So what's it all about? The world you find yourself dropped into has been drained of all its colour by the evil Zark. To trash the monochrome madman you've got to collect up drops of paint you find scattered around the surreal environment to fill up your paint pots.

I'm sure you won't be too surprised to learn this is a whole lot more tricky than it sounds... Your Wiz object, looking remarkably like a curious giant pea. starts off bouncing and rolling along and is extraordinarily difficult to control.

In action on the planet's surface you come up against numerous infuriating obstacles resembling stalagmites and stalagtites. While the obstacles themselves are quite inoffensive, Wiz's movement in the early stages (bouncing high in the air and ricocheting off everything in sight) makes it horribly infuriating.

There are seven options in all, though some can be activated twice in order to enhance their initial enhancement, if you see what I mean.

Obviously, you're not going to be allowed to simply skip through the icons at will. In order to highlight one, you need to wipe out an alien which will change into a green circle. By flying Wiz into the circle, the icon box will turn blue, indicating that it can be selected should you choose to do so. Then, to select the icon, you've got to waggle the joystick furiously left and right for a second.

All this could be rather overwhelming and, in a moment of uncharacteristic generosity, the programmers have given you an assistant - called Catelite. By working your way to the third icon and hitting Fire, a Cat (disguised as a small pea) will be summoned up. You could be forgiven for thinking that a cat wouldn't be of great help in a game like this. You'd be totally wrong. Cat is completely invaluable. He'll follow you around and gallantly throw himself (on your command) into the aliens.

OK, so you've flown around and shot some things and got quite handily tooled up, thank you. So how do you go about getting the colour back into Wizworld? Easy, some of the sprites, when shot will change into drops of colour which can be picked up by Cat. As you zoom around, picking up the correct colour (indicated by a cauldron on the bottom of the screen) the little pots (check out the screens here) will gradually fill up.

As for gadding about, there's some mapping needed, if you're that way inclined.

There are tubes in the surface of the Wizworld lunescape which lead to other levels. The deeper the level, the more ferocious the aliens. Since it's possible to return to an early level from a tougher one, you can build up the colour pots as you go, without having to complete one level in one go. This means, first, it's very playable and, second, it's quite a challenge.

Though simple to look at, everything moves smoothly and the scrolling is flawless. Should you be fortunate enough to become totally equipped with all the icons, you can wreak immense havoc on the aliens.

Wizball is virtually flawless. It's addictive qualities, combined with super-smooth graphics and highly original gameplay make it one of the very best games to appear this year. A classic.