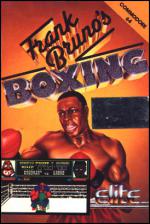 Frank Bruno's Boxing is essentially a home computer version of the arcade favourite Punch Out! The idea of the game is to beat eight boxers, one after the other, in an attempt to become the new World Champion. On beating one fighter you are given a personal code, unique to your initials, so that the next opponent can be loaded in from tape.

The view of the ring is from slightly above and behind your boxer, none other than Frank Bruno, so you're looking into the screen with the opponent facing. As a digitised Frank, one can perform several manoeuvres, such as left and right head punches, body blows, a Knock Out punch, ducking, and of course guard up and down. Using these skills the other fighter has to be knocked down a total of three times within the given time limit.

Both boxers have a 'power' bar and each time a successful punch is landed, the bar increases in length. To get the power bar to its maximum, successive accurate punches must land on target. But if you should get hit when your bar is at the halfway mark, then it depletes - rapidly! Once it reaches its peak the KO punch, a vicious right hander, must come into play. If this deadly blow is accurate a couple of times, then the opponent is usually floored. If, on the other had, he gets his bar to maximum, then his next punch has the same effect. On the first two occasions, when a boxer gets knocked down he always gets up. But on the third ... Bocko! He's down for good!

Most of the other boxers have a special punch or move pertaining to their name, and unless this can be avoided, you will be floored instantly. The first boxer encountered smacks you viciously round the head with both hands while Fling Long Chop, the second opponent, drop kicks - not quite the Queensbury way! Subsequently the moves and techniques of each boxer must be learned, if one is to succeed. Fortunately, there is a 'replay last match' option so that the last boxer can be tackled again and again, until you are eventually competent and finally victorious. If you manage to plow your way through all eight boxers then a newspaper, with a headline proclaiming you Champion of the World, is shown.

There seems to be a glut of boxing games recently and each seems to be nearly as bad as the other. Frank Bruno's Boxing is no exception to this rule. The presentation is extremely good, packed with hundred of little touches. Playing the game is near impossible with the annoying control system used. The loading system is also amazingly cumbersome. Once you get into the game you soon find it to be repetitive despite the different boxers, the action merely getting progressively harder till impossible. What I did like was the loading music, a very good version of Trans X's Living on Video, though it hardly makes it worth shelling out hard earned cash.

Frank Bruno's Boxing has been long awaited by many since its announcement some months back. Then, with only Alligata's Knockout to threaten it in the boxing game field, it would have taken the market by storm. Since then both Barry McGuigan's and Fight Night have been released, and both are much better, with more depth, better gameplay and graphics. The graphics on FBB's are reasonable, but many of the characters have massive glitches in them, and sometimes they even come apart! The gameplay is rather limited, with only the eight boxers to challenge you, and they're not too difficult to beat either. The control method is pretty tricky too, especially using two joysticks, or joystick and keyboard. It would have been good three or four months ago, but now perhaps it's a bit too late to make any real impact on the boxing game market.

When Frank Bruno's Boxing was first promised, there weren't any other boxing games on the market. Since then however, there have been three prominent releases (all for different reasons though!) in the form of Alligata's Knockout, Activision's Barry McGuigan and more recently US Gold's Fight Night. With the latter two games to compete against, I don't think that Frank Bruno's stands much of a chance, because, to my mind, it has an inferior approach and is much less interesting to play. If this had come out at the same time as the very popular Spectrum version, then it would have had a better run. Sorry Elite, but I'm afraid it's a case of too little too late.

Presentation 91%
Loading the boxers from cassette is a real pain but the overall presentation is excellent.

Sound 72%
Nice tunes, but all a little short.

Hookability 78%
Desire to become a champ is high.

Lastability 62%
But it's pretty simple and will you go back to it after?

Value For Money 72%
Punch Out! is ageing and there are better boxing games about.

Overall 69%
Three months ago it would have been the best, now it's a case of try it and see if you like it.

Too little too late... Although the overall presentation is excellent, loading the boxers from cassette is a real pain.