Published in Your Sinclair #57 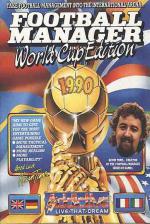 The third FM has you managing a team through a full World Cup tournament (and, if you're anything like me, watching them come bottom of the whole world) and offers a whole barrel-load of new features (though sadly no automatic win option for crap managers like me). You start by picking a skill level, a region (which governs the way you qualify) and the country you want to represent, skipping the preliminary rounds if you choose Italy or Argentina. After naming your players, up pops one of a few 'digitised-looking' (ie gritty) pictures, purporting to be of Brain Rogers and Paul Yates, the commentators. But they can't fool me - they're really Nigel Lawson and Franklin D Roosevelt! They ask if you want results by group or match, and then it's prod-a-key time until the program gets to your turn to play. And this is where the clever bits start.

Your 22-man squad is made up of strikers, runners, passers, tacklers and a goalie, and it's your job to put together the best side you can (and in my case still get beaten 4-0 by Zaire). You can position the players anywhere in your half, specify their playing styles (wing, thru-runs, positional, find space, sweeping), set the directions they can pass in (the more you allow, the more likely they are to pass than run), and change them from 'playing' to 'substitute' to 'reserve'. Phew! Displaying all my native footy skills I bunched everyone in the middle, told them to pass in every direction and run like hell at the opponents' goal. Amazingly. I won! (Against Albania. All right, who laughed?) But this isn't all! You get to answer sarky questions from the press and give pep talks to the players, with what you say affecting the team's morale. This is one of my favourite bits - the choices you get aren't obviously beneficial, and you have to be really tricky to avoid morale plummetting. A good tip is to play safe with high morale, and only be aggressive when it drops dangerously (but then again, why trust me? I lost almost every match).

With all this hard strategy out of the way, it's time to sit back and let the team do their bit. The match is presented in snazzy three-quarters-overhead-view full-screen scrolling Greenovision, the players being nicely animated in red and blue. With everyone hacking away at the ball things tend to get a bit confused, but Supertoms has thought of this and a bash of the Fire button switches the action to a birds-eye view, with players identified by a letter. You can make substitutions, and at half-time plan your strategy, but otherwise the action scenes are of the 'watch and pray' type. And when the final whistle blows (or rather doesn't - there's no sound) it's time to look through the tables, assess your position and, if you're as crap as I am, give up in despair and play Guardian II instead.

In short, it's slick, well-programmed and it's got more depth than Marianas Trench, but if you don't like management games you'll probably end up using the pictures of Kevin Toms to throw darts at.

Now, if I put a striker at centre-spot, flank him with two runners and... curses! I'm beginning to enjoy it!

For fans, the best thing since the last Footie Man. The unconverted should start running now!

For fans, the best thing since the last Footie Management game.