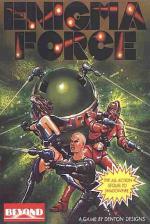 It's been a while coming but finally, the long awaited sequel to Beyond's famous Shadowfire is here. Having captured him at the end of the previous game, the Enigmateam is transporting wicked General Zoff across space in the Enigmacraft to face the Emperor's music. As the ship passes a nearby planet on the Imperial border, Zoff concentrates his psionic powers on the ship's guidance system causing it to crash. When the crew gain consciousness, Zoff has disappeared.

The planet is Syylk's homeworld and at the moment, its insectoid inhabitants are fighting a war with reptiloid troops loyal to the evil Zoff. These nasty creatures also have some ships on the way which, at some indeterminable time, will annihilate the planet. Controlling the Enigmateam - Zark Montor, Sevrina Maris, Syylk and Maul (the observant will have noticed that Manto has been written out of the script) - you have to locate the leader of the insectoids, make him your ally, find the only space worthy vessel in the reptiloid area and recapture Zoff as he tries to reach it. Simple.

Well, not quite. Commands have to be issued to the team and enemy troops have to be dealt with - all in the available time limit! Zark Montor is the team leader (and main character). Syylk is the second in command - a heavily armoured and incredibly fit fighter with a pathological hatred of Zoff. Sevrina Maris is the markswoman and locksmith of the team. Finally, Maul the robot, adds slow moving but heavy firepower.

Unlike its predecessor, there is an action display area at the top of the screen. This shows the interior of the underground complex into which the Enigmacraft has crashed, depicting not only the team but also the various allies and enemies in an isometric perspective. Like Shadowfire, there is a series of icons by which the characters are controlled in the lower half of the screen. The control procedure usually consists of selecting a character, and then selecting a command icon for that character. Up to five different commands may be 'stacked' for each character at any time. Miniature versions of the relevant icons are shown beneath the character's icon when this happens. Possible actions include four directional movement, picking up or dropping objects, and two different types of combat. A character's status can also be checked from the icon table along with other game 'utilities' such as making a character reload a weapon, activating an object (usually explosives), quitting, pausing and the like. When a character is to reload a weapon, you must first select a magazine of ammunition from the objects carried area. Only the existence of ballistic ammunition is made clear but other types exist within the complex. There are some object icons about which the manual says little except that you should discover their uses for yourself. One of these is a red fish... It would appear that some may be useless.

A particular character may be selected to be put directly under the player's control with the mindprobe icon. In this mode, the character may be moved about using either keyboard or joystick control. Actions are limited to movement and combat when this option is selected but it allows rapid deployment of the character which may be necessary.

The screen uses single colour graphics on a black background. The colour shown depends on the character under icon control. Sound effects support the actions of sliding doors, firing of weapons etc, and there is also an introductory theme tune.

'Controlling the characters takes some getting used to and this inevitably means the first few games are likely to be unsuccessful. Once you get used to the controls, the pace is fast and the adrenalin is soon flowing. Somehow, I still feel that the icons are a little gimmicky and unwieldy but this will probably not deter those already addicted to Shadowfire. An attractive feature is that the game is playable in its own right so it really doesn't matter whether or not you bought the prequel. The opening theme is really well constructed and the redefined character set used throughout the game is an effective finishing touch. I think the game would play best with a joystick. Otherwise it's useful to have thirty fingers.'

'I can honestly say that I didn't like the thought of reviewing this game, as I didn't get on with Shadowfire at all - there were too many different pages of icons and I found it a bit of a struggle inputting instructions quickly enough. There are no problems of that type in this game, however. After a few goes, getting used to inputting commands and practising fighting, this game began to grow on me. I've been playing it solidly for the last few hours and I can't see myself putting it away for a couple of hours more, at least. Graphically, it is far superior to its parent; the 3D works very well and the characters are detailed and move around the screen very well. Sound is also pretty good, with a tune at the beginning and a few well placed effects during the game. Generally, I'd recommend Enigma Force to everyone as it is very addictive and immediately playable.'

'Shadowfire was an enormous step forward for icon driven games and now Denton Designs have launched the sequel; which proves to be a worthy successor. Enigma Force is best summarised as a combination of Shadowfire and their other hit game Frankie. Getting into the arcade/adventure is no problem at all and within a short while using the icons becomes second nature. Should you dislike using the icons then you can play the game by controlling the character of your choice with a joystick. My main reservation about Enigma Force is that it may prove to be a bit easy. It doesn't take very long before you start doing quite well. On the whole this is a good game, much more arcade orientated than Shadowfire, that should appeal to fans of Denton's other games.'

A good game, much more arcade orientated than Shadowfire... It should appeal to fans of Denton's other games.