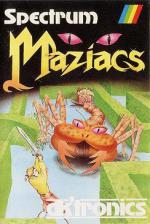 Maziacs puts OK back on top form again in a highly colourful and eventful maze game. The aim is to enter the maze and find the gold, then bring it safely out again. You are told that the gold maybe anywhere, but at least 200 moves from the starting point. Embedded in the maze walls are several useful items like food and swords, and here and there a few prisoners who, despite their incarceration, seem to know the way to the treasure. You get what you want by trying to move into the square occupied by the object (or prisoner). The food is essential it you aren't to die of starvation, and the swords are also essential if you want to survive the dreaded maziacs. These spidiferous creatures ramble about all over the place, sometimes in packs. Sadly a sword can only be used once, so avoid the packs - they move like greased lightning even in the lower levels of play.

If you ask a prisoner the route to the gold he tells you by turning the path yellow. This you can follow for a short time before it blinks out and you must then find another prisoner. Once the treasure has been discovered your problems really start. For one thing you can't carry a sword and the treasure at the same time, so it's best to try and kill off as many maziacs as you can on your way in.

A useful feature is called VIEW. The section of the maze on screen is only a fiftieth of the total, but pressing the key for VIEW lets you see a twelfth, and includes positions of swords, prisoners and food as well as maziacs. There are play levels where you can dispense with such cissy aids as this!

Keyboard positions: good, but user-defined as well so you can set up for AGF and Protek
Joystick options: Kempston and cursor controllers via user-defined
Keyboard play: slightly hesitant
Use of colour: good
Graphics: excellent
Sound: continuous and imaginative
Skill levels: four
Lives: one
Screens: scrolling maze, set up randomly each game.

'All the instructions are on screen, but they are very good and helpful. Although the keyboard layout is sensible you can opt to define your own keys. This is a sort of maze adventure and it's a good one. The graphics are excellent with plenty of animation - it's fun and addictive to play. I also liked its large library of comments when you lose a life.'

'Everything is very clear and colourful. The game has instant appeal because of its graphics. "You" are very well animated tapping your feet when standing still, even squatting down in boredom if you don't move for a while. The maziacs are also nicely done - they look and move in an evil way. If you encounter one (which you will) then the battle is fun to watch. Bound to be a success.'

'Plenty of appeal, with lots to do and good animation. Helpful touches like the VIEW facility can be a mixed blessing since you can't move while looking at the larger map, but the maziacs can! Addictive.'

Helpful touches like the "view" facility can be a mixed blessing since you can't move while looking at the larger map, but the maziacs can! Addictive.