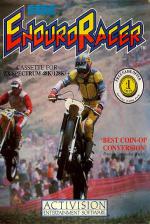 "It's another racing game," they said, and the heart sank. "Motorbikes," they went on, and by this time the ol' red pumper was wheezing away at liver level.

Then suddenly my mental light bulb pinged into action. Wasn't Enduro Racer that huge throbbing arcade game with the twisty-turny effect of being on a real motorbike? Wahay! This might not be so bad after all. And it isn't! In fact, Activision's conversion is more than not bad - it's a down home Class 1 ripsnorter.

Five levels of vicious motocross await you, and if you think that sounds a bit peasy, on yer bike - just try getting to level 5. You start in woodland, fizzing along the road on your high speed hairdryer, haring past trees and your rival Eddie Kidds. As you power across the landscape, your target is to get through the course in less than a minute - no mean feat. Especially with all those hillocks in your way - still, they make a change from the usual boring flatness and you'll get a real thrill as you mount that hump! Wheee! Don't get too carried away, though, 'cos you'll often find rocks and things lurking over the horizon just itching for you to smash into them.

You'll also come across some devilish looking ramps - uncannily like those "sleeping policemen". But don't slow down - these'll let you fly straight over fields of lethal boulders with the greatest of ease. When you land, pull the joystick back and you'll do a wheelie, which'll allow you to accelerate again more quickly and make you look really macho. Otherwise your body simply jumps off the bike seat (only your hands rescuing you from certain doom) and you'll end up being overtaken by the snails. Push the joystick forward to increase speed, press fire to decrease it When you move round to the left or right, you lean into the bend - if you lean too far, your foot scrapes the turf and apart from wearing out your boots you'll also slow down.

These are very much the basic skills. But while the first level is mainly about staying in the saddle and going like the clappers, the next stage, set in a baking desert wilderness, is a biker's nightmare. In fact it's a bit of a doughnut to get through. Vast slabs of desert rock sit slap bong in the middle of the rood - one false move and crash, you're spattered across the asphalt. Hillocks hide evil hairpins that even Danny La Rue would find a trial. Ramps are alternately life-saving boons and well-disguised traps.

None of this cleverness, though, would mean a bunch of bananas if the graphics weren't up to scratch. And as you can see from the screenshots, they're just what the doctor ordered. When you approach a hill for the first time, you find you're over it before you con say Evel Knievel, let alone react. This can cause the odd problem if there's a rock on the other side.

Some of the effects, too, are spectacular. Crash over a boulder and you can almost feel the bruises. Bang into a slab of rock and you look for the blood. The 3D illusion is so well handled that you barely notice it. I also like the nice little scroll you get when you remount your crashed bike, moving you bock into the centre of the course. Enduro Racer is packed full of subtle touches just like that. It's not entirely perfect, of course - avoiding the boulders, for instance, can often be a matter more of luck than of judgement. Even so, it's a racing game that's streets ahead of the opposition. Give it a road test and see! Brrrrmmmmm......!

A racing game that's streets ahead of the opposition. Give it a road test and see! Brrrrmmmmm.