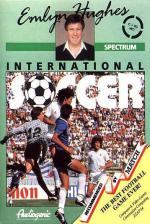 While you're thinking about that one (and pass the vom bag when you've finished with it), here's Emlyn Hughes' International Soccer, the computer games industry's latest attempt to cash in on our fascination with the national game. Do gamers actually play footie, I wonder? Do they have time, if they spend hours a day on computer footie simulations? Still, unabashed by the presence of at least 458,930,309 perfectly adequate footie sims on the market. Audiogenic has joined the merry throng, with a sim based on a national league and cup system for international teams (well, it's different), and the added bonus of Emlyn's grinning fizzog splashed all over the cover. No doubt they'll sell triliions.

But is it any good? Well, we are happily past the day of the truly crap footie sim - remember Super Soccer? Remember the first G Lineker game? But although this is perfectly playable, it's hard to recommend it over any of the real old faves that the dedicated footie simster comes back to again and again. Essentially it's the old problem - instead of going for a straightforward arcade game, or leaping in at the deep end and concentrating on the management side, International Soccer attempts to kill both birds with one stone - and doesn't hit either in the process. So there's some action, and there's some strategy, but there's not really enough of either.

What does not help matters is an innovative but infuriatingly awkward menus system, based on the WIMP systems you find on STs and Amigas. With the joystick you pull down the menu, but if you stop on one selection for even a femtosecond, you find that you have selected it, which be a little tiresome when it's like SAVE GAME.It would be rather more sensible to select an option by pressing the joystick - or is that too simple?

There's also an important Fib in the instructions, and I quote "Whilst there are a wide range of facilities and control options, these have been designed in such a way that you can sit down and play without hours spent studying the manual and getting to grips with the controls." Wrong. It's all but impossible to find out what's going on without studying the instructions with the greatest care, and even then you might not find out everything you want to know. It can be frustrating, for instance, to find out that you are managing Italy when you are much keener on England and besides, you don't like lasagne.

The strategy elements, when it comes down to it, are thin in the extreme. After all, when you are choosing your players, why should it matter which ones you select when all of them are going to be controlled by the ultimate chance factor - your hand on the joystick? This leaves the arcade segments. These are by no means bad - Match Day 2 has had much beneficial influence on football programming - but they are not better than the other 458.930,309 sims on the market. How many different ways are there of playing football on a Spectrum? Very few, if the endless stream of Speccy footie sims is anything to go by.

In the end, there's a real "Why bother?" feel to the whole enterprise. Of course, we know why they bother. Huge wads of cash is why they bother. It's by no means a bad game - moans aside, it's been well programmed and looks a treat, especially the computer versus computer games. But if you have Match Day 2 or any of the Football Director-style games, you don't really need this. I certainly don't. (BUNG!) Next please.