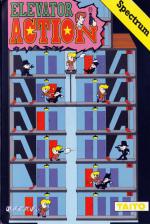 Secret agent Otto has received his orders. Ahead of him lies a mission of the utmost importance to national security. Enemy scientists have developed their most deadly weapon to date, and the plans are being held at a high-security skyscraper on the other side of border. Otto has been given the task of penetrating the building, nabbing the plans and making his way to the ground floor for a quick getaway.

Proceedings begin with a short animated sequence showing Otto making a daring rooftop landing before he enters a lift that takes him down to the top floor. From here on he's under your control.

Unfortunately for Otto, the plans have been scattered throughout the building and are only to be found behind red doors. His basic aim is to open these doors, collect the pieces that make up these plans, and then go down to the waiting car on street level. It is impossible for Otto to leave the building before he's collected the entire set - attempt to do so and he finds himself in the middle of the building.

Enemy guards are searching the building for Otto, and they have orders to shoot on sight. Otto can defend himself, and is armed with the latest in automatic pistols. Being a top agent, he is also trained in the martial arts and is can kick the guards to death. To dodge the oncoming bullets, Otto can leap into the air or lie flat on the floor. These skills are not that vital at first, but come in handy in the later levels when the guards gain the ability to duck and fire low. A trick Otto has learned from experience is to shoot the lights out when he is in trouble. This can only be done while using the escalator, as the lampshades hug the ceilings and cannot be reached by jumping.

When all the plans are collected, it's time to rush down to the waiting car for a quick getaway - that is, to the next and harder level…

'I wonder if elevator games will take off on the Spectrum. I hope they don't if this is the best that the companies can offer. The gameplay is generally slow and quite infuriating, so I couldn't play it for long before pulling the plug. The graphics would be alright by themselves but the use of colour is sloppy and messes up the whole screen. The sound is below average: there are no tunes and the effects are minimal. All in all I'd stay away from this one. There are good arcade conversions around already and most of them are taken from better originals.'

'Initially I was attracted to Elevator Action as it had good graphics and is quite fun to play - but the game doesn't contain anything that is in the slightest bit addictive. The animation is well up to scratch, even though the men move in a peculiar fashion. I liked the idea of moving up and down the building, and trying to trap people on top of the elevator. Sliding up and down the stairs was also fun, but the slightest appeal of all these little features soon wore off. This is easy to get into, but contains little to keep one addicted for long, and thus is a bit too expensive.'

'Despite the very simple scenario and game idea, Elevator Action should win awards for addictiveness. Moving up and down lifts and shooting baddies as you go is one of the most typical game bases around, but the implementation is excellent. None of the elements which make it so good are immediately apparent - the graphics are comparatively poor and the sound is minimal. The problems however are more than compensated for by the incredible gameplay. It's well worth looking at.'

The problems here are more than compensated for by the incredible gameplay.