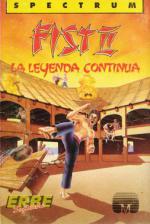 Way of the Exploding Fist was virtually unique. A totally original idea presented in a polished, playable format. It founded the entire beat 'em up genre, and imitations have poured forth ever since. Now at last, nearly two years after the game first appeared, the sequel is here.

You control the only warrior fit enough to settle the score. To find the temples our hero runs through a horizontally scrolling landscape, climbing up and down ladders and jungle ropes, and jumping down holes or even oft high cliffs.

When he encounters a Temple Guardian, the screen stops scrolling and a fight to the death ensues (or your opponent flees off the edge of the screen).

The ultimate goal is to defeat the evil Warlord. To achieve this, the young Disciple has to find eight mystical scrolls and take each to its corresponding temple, thus gaining its power. The length of the disciple's life is governed by his stamina level, this is displayed at the top of the screen. The 'maximum stamina level' begins at a fairly low point, but it increases slowly as more enemies are dealt with. Meditating at a temple also increases this stamina level.

The Temple Guardians come in a number of shapes and sizes. Peasant Soldiers have the least stamina and are the worst fighters. Warrior Guards are slightly harder to defeat. Ninjas, equipped with throwing stars, are better still. Shoguns and Assassins are deadliest opponents of all.

The fighting sequences will be familiar to all beat 'em up fans. There are sixteen moves, accessed by a multitude of joystick wiggles. When a blow is successfully landed, the recipient's stamina level decreases accordingly - a lot for a flying kick, but not so much for a punch. When one of the two combatants runs out of stamina, he is dead. If the Temple Guardian is killed he vanishes - if our hero comes off worse however, he loses one of his three lives and is returned to the last temple he visited. An extra life is awarded each time a scroll is taken to a temple.

Control keys: definable, up, down, left, right, fire
Joystick: Kempston, Cursor, Interface 2
Use of colour: unimaginative use of the Spectrum's own colours
Graphics: a great disappointment, especially when compared to its predecessor
Sound: great shouts and screams during the fight sequences, otherwise average
Skill levels: one
Screens: large scrolling landscape

'What's this, the sequel to the only decent beat 'em up on the Spectrum. Well, Fist II certainly isn't going to take that title away from its predecessor. The gameplay Is spoiled by the time spent looking for action (it can take as long as five minutes to encounter the next ninja), and even when the action is found It's pretty tedious. Killing a ninja or a pack of wolverines isn't a feat worth telling your mates about. The thinking behind Fist II is sound, but a potentially good game has been marred by bad programming'

'I still have a bash on Way of the Exploding Fist, but Fist II seems to have taken the competitive spirit out of the game. The characters aren't as well drawn as Fist, but the landscapes are well designed and give a good feeling of size - it's a pity that some of the landscape repeats itself after only a short walk though. I very quickly got the impression the Fist II contains very little to do, apart from trundling all over the place. Beating up the baddies was fun to start with, but they present little challenge. Fist II didn't really appeal to me'

'Technically, there's nothing wrong with Fist II. It's just that stomping around all the locations looking for a few baddies to duff up is so boring. The graphics are neat, and the combat sequences are as playable as in the original. Unfortunately, I think that MELBOURNE HOUSE have given Fist II far too much hype. Having advertised, this for so tong, I would have thought that their programming team could have come up with something a little better than this. The combat practice game on the reverse side is fine, but I don't think that it's worth buying just for that'

Fist II is over-hyped. Having advertised this for so tong, I would have thought Melbourne House could have come up with something a little better than this.