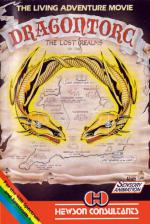 Dabble in a spot of dark age magic, pitting your wits against Morag, witch queen of the north.

Dragontorc, from Hewson Consultants, is the sequel to Avalon. You play Maroc who, with the help of a few spells, has to search for the five crowns of Dragontorc.

The search takes Maroc into the Lost Vaults of Locris and from there, along ley lines, to various locations across the British isles.

You start with three spells, Servant, Move and Bane. Other spells must be added to the list as without them nothing can be achieved. Wisps, skeletons, spiders and a flying cauliflower are just a few of the creatures you will meet and can be disposed of if you have the right spells.

Other characters who you meet may help you and the manner in which they are approached will affect their attitude towards you. Elves are particularly useful.

Maroc travels via levitation, gliding along in a lotus position. In fact Maroc is really sitting by a fire and you are guiding his astral projection.

The actions of all characters are fairly realistic. Skeletons come running with outstretched arms and snakes stop, wait and then dart forward to strike. Doors really open.

Although the graphics are relatively simple, they are clearly defined and scroll in four directions. However, when Maroc is in motion, the scrolling is jerky and can be distracting.

Avalon fans will love Dragontorc, which is more user-friendly. The puzzles are well hidden and tricky. If you have never played Avalon, however, start with Dragontorc, it is the better game.

Avalon fans will love Dragontorc, which is more user friendly. The puzzles are well hidden and tricky.