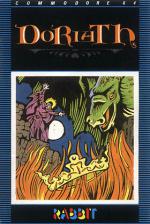 In days of old, Atelan, the Lord of Time, was besotted by a fair maid by the name of Fianna. So in love was Atelan that he gave her the legendary Coronet of Arien, the wearer of which would become immortal. Though not accepting Atelan's feelings for her, smart girl that Fianna was, she still accepted his generous gift. Soon, however, Atelan discovered his love was never to be returned and he flew into a rage, taking back the Crown from his love and casting it into the depths of Doriath. And there the coronet has lain, venomously guarded by the minions of this dark place.

Recently Mage and Lore Master, Elidaan, has discovered the scroll of Fianna and learnt of this sad tale. As there wasn't much to do and Elidaan fancied being immortal, he decided to brave the sanctuary of Doriath and have a go at retrieving the Crown of Arien.

This is where you come in, your job to guide Elidaan through Doriath to his final goal. You enter Doriath with no possessions and very a small repertoire of spells. Around the caves of Doriath you find various items and spells encased within casks which are opened by passing over them, whereupon you are told of the new addition to your inventory.

Apart from the different spells, the objects you encounter are of five different types. Stamina Potions boost Elidaan's energy, which is displayed as a percentage at the top of the screen. Using this potion at the right moment can get our hero out of many a tricky spot. Portcullis Keys allow passage through any portcullis barring the way, while Trapdoor Keys are used to get past trapdoors. Fungata Potions cure Elidaan of any ill effects caused by the mushrooms growing in some caves, while Cloronar Potions are used as a defence if they are drunk when standing next to a plant or shoot. Each object can only he used once, though a store of them may be built up.

Along the top of the screen is a set of five symbols, each depicting one of the different objects you find. Underneath each symbol is displayed how many of that particular artifact you are carrying. To use an object you position a cursor over the symbol you want with the F1 key. Hitting F7 then activates the object.

There are nine spells you could collect in addition to the one you are given upon entering Doriath. Different spells kill different creatures, and to wield one you must hold fire and press down. The spell then appears and can be controlled with the joystick.

The game is presented in classic arcade adventure style, using a standard flick screen method. Elidaan can go left, right, and also levitate for short distances. To travel between some sheets you must use a rope. About the cave there are various nefarious characters, all willing to sap your stamina. Some of these foes are a mite more malevolent than others, some of them firing arrows at you. In some screens you may be unfortunate enough to come across the odd dragon or two, spitting deadly fireballs. If you're foolish enough to guide Elidaan into the dragon then it's game over. Facing slightly less powerful foes, you find that 'Game Over' only appears when your stamina drops below 2%.

The combined programming talents of Ian Gray, Lee Braine and Chris Cox return in this latest release from Virgin stroke Rabbit. I think the last thing they did was Commodore's Spirit Of The Stones which wasn't too bad as platform games go. The same can be said of Doriath in that it's an okey doke arcade adventure, with poor graphics but good, Chris Coxesque (!) music. The game isn't particularly taxing mentally, although there is quite a high frustration element as the wizard does jump rather strangely and awkwardly. A fairly competent release and certainly a lot better than the other Rabbit/Virgin game, Zyto. Still, overpriced for what it offers though.

This is a pretty gruesome game. The graphics are very poor, with badly animated single colour sprites and a grating tune (contrary to what the cassette box says). The instructions are very poor, with practicably no indication of what you're supposed to do. Rabbit will have to get their act together if they want to gain a better reputation than the one they've now got with their first two releases.

Presentation 67%
Adequate but not outstanding.

Graphics 38%
Coarse overall effect with poor definition, animation and bland use of colour.

Sound 66%
Fair version of 'Hall of the Mountain King' but unimaginative FX.

Lastability 46%
...but its effect soon wears off.

Value For Money 49%
Budget software ought to be released at a budget price.

Overall 47%
Not one of the better arcade adventures available but even so there's a lot worse.

Not one of the better arcade adventures available but there's a lot worse.