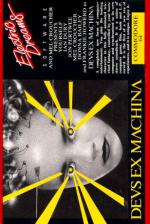 In October of last year Automata released this unusual package for the Spectrum. It won the CTA Game of the Year award for 1985, for which Automata's Christian Penfold was grateful, but which caused him to hit out at software distributors for having failed to get the product out. At the time of the award dinner, Deus Ex Machina had managed to sell less than a thousand copies. Now, on the C64, Electric Dreams are hoping to do much better.

This is not so much a review, for Deus Ex Machina defies review, more a look at a way of life and death...

HELLO. I WANT YOU TO PAUSE AFTER I COUNT YOU DOWN, AND RECOMMENCE PLAYING AT THE SCREEN'S REQUEST! FIVE - FOUR - THREE - TWO - ONE - PAUSE!

Tuesday evening, after tea and compulsory prayers, the last mouse tried to hide from Mankind inside the Machine. Just before it dies, as the nerve-gas eased its sphincter, the last mouse dropping caused a slight accident. You may control the progress of this Accident, on my behalf, and with my permission, and lead it up the telepath.

So starts a game which can only be described as different. What makes it different is the game idea in which you control the progress of an accident as it grows, learns and develops into a human being and eventually dies. Throughout the game you are given a percentage score which gets higher and lower as the game proceeds. Deus Ex Machina is unique, as much of a milestone in computer history as The Hobbit with its graphics, because this game has a synchronised sound track! The cassette case contains two tapes. One is the computer game - two games, one on each side - and the other is the sound track, also on either side. The sound track - once synchronised - plays all the while the computer program is running.

The sound is of very high quality and stars Ian Dury, Jon Pertwee, Donna Bailey, Frankie Howerd, Edward Thompson and Mel Croucher (Automata). In addition, there is music with a distinctly Automata-ish feel to it, but it is definitely more serious in tone than usual!

The game is not "fun" in the usual sense; it's more of an experience. Next follows a brief description of each of the stages in the game.

All the screen's a stage, and all the men and women merely players. They have their exits and their entrances, and one person in their time plays many parts, their act being seven ages.

At first the infant mewling in the test tube's neck...

This stage of life consists of seven sub-games in which you help create a baby (it's okay, all quite tastefully done - well fairly anyway). The machine (the central controlling force of the UK), which rebels after witnessing the accident (which is wonderfully animated) does most of the work by stealing an egg. The graphics are quite good here, as all the time the Defect Police (Frankie Howerd) are out to get you because you are a defect, as was the mouse.

Then the whining School Child, with cassette and shining morning face creeping like a snail unwillingly to databank...

This stage consists of only one game in which the Defect Police must track you, for that is their function. When you are caught, you use your powers to parry their psychoprobes. Throw up your shield, move it clockwise and anti-clockwise to protect your entombed and revolving form. The graphics are interesting and work especially well on 'yourself'. This part is awe-inspiring and the sound track, as ever, is well performed.

And then the Lover, sighing like a furnace, with a woeful video made to their lovers' hologram...

This stage is similar to the last in which you must touch the lips with your cursor (!) as they approach your body; later on eyes replace the lips. As a game, this stage is quite easy and it is the last program on side one. The graphics are intriguing, with the sensuous movements of the lips and the hypnotic track by Donna Bailey as The Machine. At this stage you turn over both tapes, reload and re-synchronise side 2.

Then a Soldier, full of strange oaths, jealous in honour, sudden and quick in quarrel, seeking hi-score, even in the laser's mouth...

Now you are grown and as Frankie Howerd intones the chant, "War crimes are easy", the ground moves under your feet and pitfalls appear over which you must pump. After a while the action changes and mental tortures sear down on you. You must protect yourself by raising the telepathic shields and reflecting the blasts. At last The Fertiliser (Ian Dury) says, "Killing is wrong, even pretend killing on little screens. And people that sell violent games to children should be put away somewhere safe, 'til they get well again." At which point The Machine rebels against the Defect Police.

And the justice, in fair round belly, with eyes severs and clothes of formal cut. Full of wise words and machine code...

Here you are shown, fat and slow, your empire behind you. Words appear on the ground coming towards you. The words are mixed up, some good and some evil and some connected with evil. You must jump over the good and stamp on the evil.

The Sixth Age shifts into the lean and slippered pantaloon. With spectacles on nose, their youthful clothes well saved, a world too wide for their shrunken shank. And their adult speech synthesiser turning again towards a childish trebble, piping and whistling in its sound...

You see your character old and broken. You must trace his heartbeat.

Your life is expressed as a percentage score. The screen switches and you must split up the blood cells so they do not clot.

Again the screen changes and again you must trace the heartbeat. So it goes on until death and the end - of the beginning.

Last scene of all, that ends this strange, eventful history, is Second Childishness, and mere oblivion, without keyboard, without monitor, without power supply...

Deus Ex Machina is not for people who want a straightforward shoot-'em-up because it simply isn't that sort of game. In many senses, it isn't a game at all, although there are humorous little games within its scope. It becomes an experience, aided by the hypnotic sound track and the emotive words. In fact it's hard to decide whether this is an extension of the computer video game by music, or an extension of the "concept album" by the addition of games playing. In the end, it doesn't really matter - Deus Ex Machina is a noble development idea, which points towards a new understanding at what can be done with computer games. It isn't perfect but it is a lot more fun than the idea might at first sound. The graphics throughout are always interesting and sometimes absolutely excellent. The sound track is produced to a high level of quality, so much so, that together with its content, it's alone worth a considerable chunk of the price.

This may be over a year old now, but Deus Ex Machina is as fresh and original today in its Commodore reincarnation as it was when it first appeared on the Spectrum.

We don't inherit the Earth from our ancestors,
We borrow it from our children.

Imagine if we could begin our little life all over again.
Imagine if it was all nothing more than some electronic game.
Imagine if I knew then what I know now.
What did you learn?
I can't quite remember, but I'll try and be better next time...

The graphics throughout are always interesting and sometimes absolutely excellent. It isn't perfect but it is a lot more fun than the idea might at first sound.