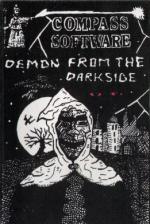 Don't be put off by the cassette insert artwork, which is pretty grisly to say the least. Demon from the Darkside is a snappy, no nonsense little adventure which was put together using The Quill and The Illustrator, and a fair amount of attention to detail if the information you get when you call up the vocab list is anything to go by.

You are the good wizard's apprentice, trying to hold off the demon armies of the bad wizard. To delay the shadow demons controlled by the bad guy you have to enter his (ie the villain's) hidey-hole and slay him. Simple really - you only have an army of demons to worry about, plus assorted standard adventure game problems.

One thing which irked me somewhat was the spelling - reminiscent of some of Level 9's early stuff. I mean, using advise instead of advice, and spelling things ence instead of ance... However, such things should not be allowed to detract from the actual game.

The graphics are decent enough, and you have the option of turning them off if you like. I especially liked the way objects also had accompanying graphics, so when you call for an inventory you get pictures of what you've got as well as the list in words.

I haven't got very far yet - the perennial cry of the adventure reviewer not provided with a solution - but I have been able to pat myself on the back a couple of times for solving some of the problems which are quite tricky.

The Sid mentioned on the vocab list, by the way, isn't the mysterious Sid of the British Gas shares advert (unfortunately - I would have loved to have strangled him, I'm so sick of hearing his name), but a white rat who might help you once given the gift of new life.

One very useful feature of the game is a Ramsave option which allows you to dump your present location to memory without having to bother fiddling about with tape recorders. Of course, if you want to turn your Spectrum off but Save the game, you'll need to fall back on the old fashioned cassette again.

Demon is good, though perhaps a little simple. After all. I was surprised to get as far as I have so quickly...

Quite an easy adventure but still good fun. Some of the spelling is a bit dodgy though.

Quite an easy adventure but still good fun. Some of the spelling is a bit dodgy though.