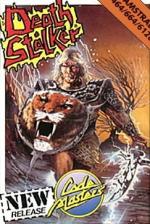 Codemasters' latest venture into the world of budget software is a game of exploration and hacking in a world filled with monsters and people stupid enough to fight them. You'll notice at once, because you're very observant like that, the increase in their prices. £3 is likely to become the standard budget price for a number of houses before too long, and what you'll be wanting to know, because you're inquisitive like that, is whether what you get is half as good again as the 'old' £2 games. Read on and find out!

The screen shows your location and any objects, monsters and exits and a column of skulls to the right of the screen gives an indication of your state of health. Your score is also shown and objects carried appear up the left-hand side of the screen. When desired a menu can be called up across the bottom of the screen.

One thing that does make this game slightly different is line of sight. You can only see into areas where a normal human could see; there's definitely no looking around corners from 40 feet away with this game. (The only other game that I can think of that used a similar system is Ranarama by Hewson. Ranarama used an overhead view and you could only see into rooms once you'd entered them; Death Stalker has a side-view instead. It is nice to have this sort of feature in a game though; it gives it a little more realism.

Throughout the game an atmospheric tune plays, but you can ditch it if you want to. The graphics are small, but there's plenty of colour and they're well animated.

There's plenty to do and lots of places to explore which means that Codemasters are going to make loads of money out of this one over the next few months. The strangest thing about it is that it's not called Death Stalker Simulator!

If we don't like something here you'll know about it. And when we say we like something, you know you can rely on it being good. Like Death Stalker. At £3 it's well worth buying, and you'll enjoy it. Promise.

Grab Factor 74% P. Enough hack and exploration to keep you entertained. N. Frustrating for a few games while you work out what's going on.

The graphics are small, but there's plenty of colour and they're well animated... An atmospheric tune also plays.