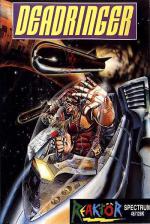 High above Earth hangs the space equivalent of Wembley - a doughnut-shaped ring, home of the Death- Race. On this ring competitors meet in a game where to lose is to die.

Each racer rides an armoured skimmer which can move to any of the three surfaces of the ring. Visibility and therefore safety are best on the inner edge, but the largest prizes await the victor on the outside edge.

Using your ability to switch between surfaces, you can avoid obstacles and approaching craft. These are shown on a large central viewing scanner, with a smaller screen giving the receding rearward view. Three bars below the main screen show the skimmer's position in relation to other craft on each of the three surfaces.

Since victory is based on points awarded for the destruction of fellow competitors, each skimmer is equipped with a blaster and a protective shield. The blaster has a limited ammunition supply and the shield only finite strength.

Should the shield be breached by too many contacts with other racers, then one of the craft's three lives is lost. And the other two may go as easily in the fast, harsh Death-Race.

'Deadringer is one of the worst games I've seen this month. The idea isn't too bad - a sort of 3-D Shockway Rider in space - but the programmers have made a real mess of it. Graphics are Jerky, badly defined and poorly coloured, and there's little playability, it doesn't come close to value for money.'

'Deadringer is instantly playable - within a couple of games you'll be happily blasting the opposition away. But it's only an average game, lacking challenge and depth. The graphics are soon forgotten, and the sound on the title screen is annoying.'

'The concept is great - if only it had been successfully implemented. The graphics range from very mediocre backgrounds and track graphics to some superbly- drawn cars, but they're all badly animated. And shooting round the tracks would be great fun if only you had some feeling of movement. There's very little to do in Deadringer.'

The concept is great - if only it had been successfully implemented. The graphics range from very mediocre backgrounds and track graphics to some superbly- drawn cars, but they're all badly animated.