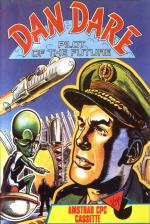 The comic-book hero of the 1950s has made a couple of comebacks in recent years, but this looks like being his finest hour. It follows in the footsteps of some graphically superb games from the Gang of Five at Virgin, and has a lot to live up to in terms of gameplay as well. Dan is, as ever, battling against the Mekon to save Earth from a terrible fate, and naturally you've got to give him a helping hand.

The game takes place inside an asteroid where the Mekon has imprisoned Dan's friend Digby. The asteroid itself is on a collision course with Earth, so Dan has to release Digby, set the asteroid to self-destruct and then escape with Digby in the Mekon's own rocket. That translates itself into quite a large exploration game where you have to find four building blocks to bridge a chasm leading to Digby and the self-destruct mechanism.

The inside of the asteroid is formed of 'flick' screens that live up to Virgin's record of superb design. They make particularly good use of shadow, detail and plain colours to produce a very effective look. This nicely sets up the atmosphere for the game, and the more of the asteroid you discover the more you'll like it.

In most of the rooms are the Mekon's guards: various types of static robots who shoot at you, and the Treens, the Mekon's followers, who fly around some rooms shooting and also proving fatal if they touch you. You can zap robots and Treens with a trusty laser which shoots horizontally and diagonally upwards.

Every time Dan is touched by a Treen, falls down a hole or runs out of stamina from being shot, he loses a life and has to continue his mission from a prison cell. This is conveniently unlocked but can put Dan completely out of position if he died in a part of the asteroid that was difficult to reach.

The asteroid's other danger is the long drops that appear on many screens, all too easily fallen into. You have to learn a technique for jumping them by hitting a diagonal on the joystick. To help you get around is an extensive system of lifts, but these are what you'll spend most of the time puzzling over. In places they form a maze where you'll have to experiment and explore: where to go and how?

The four building blocks are automatically picked up when you walk into them, so you'll know when you've found one. Dan then has to take them to the chasm, where they will extend the bridge towards Digby and the self-destruct switch. Each time a block is put in place one or more doorways will open in the game, allowing you to explore further and find the next block. Once you've got all four you have only to get to the top of the Mekon's rocket and effect a spectacular escape.

The action is very compulsive at first, an effect doubled by the excellent graphics. What really gets you hooked is the opening-out of the game with each new block to reveal new and interesting sections. It shouldn't take the hardened explorer too long to crack the game, but it's a lot of fun while you're trying and has a satisfying ending to the proceedings.

A bit lightweight for some people's tastes maybe, but I really like this new Gang of Five Treen-'em-up. After the complexity of Shogun they've gone for straightforward playability with Dan Dare, the "Pilot of the Future", and I think it pays off. Some mean problems, tons of great graphics and a host of Treens make it good addictive fun, and the speech-bubbles perfectly catch the mood of the original comic-strip.

Everything's visible, and the Treens are greener than ever.

P. Superb graphics again from the Gang Of Five.
P. Good controls once you work out the jumping.
P. Very compulsive gameplay.
P. Each discovery leads you into a new and interesting area.
P. Nice ending.

N. Just a bit too easy.
N. Not much puzzling, just exploring.