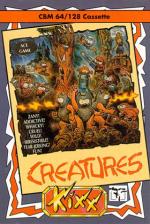 Torture of small, cute creatures just isn't cricket, so Mark "Animal Lover" Caswell decided to do the decent thing and go into bat first... and rescue some furry Fuzzies in the process, of course.

If you lived on a planet called Blot, you'd probably leave too. And that's just what its hip 'n' trendy inhabitants did, simultaneously changing their name to the much hipper (?) 'Fuzzy Wuzzies'.

No-one knows where they were heading in their colony ship, but one collision with a huge asteroid later, they end up on a Pacific island on Earth. Not exactly the most happenin' place - until the Fuzzies build a city and name it 'The Hippest Place In The Known Universe'.

But disaster's at hand when a nasty bunch of grumpy ol' Demons discover the Fuzzies' whereabouts and kidnap all but one dude named Clyde Radcliffe. Being a brave little turban. he sets out to rescue his pals, already strapped into hideous torture devices by their sadistic captors.

But before Clyde can reach each of three Fuzzies, he must get through two horizontally scrolling stages, leaping on platforms and battling the weird residents with his Droopy bullets and Fiery Throat Flamer (by holding down fire). This is difficult enough, but a sense of real urgency is created by a tight time limit.

When he finally reaches his Fuzzy friend, Clyde must work out how to rescue him in one of the now-notorious Torture Screens. These are the real stars of the show (and were so popular, they formed the basis of the superlative sequel). A combination of finely honed reflexes and puzzle-solving is required to save the day.

However, even failure here isn't too disappointing as you're treated to one of the graphical highlights of the game. The gory death sequences will have you creased up with laughter, even after seeing them several times.

The top-notch graphical quality extends to the rest of the game with a rainbow full of colours (including nonstandard ones!) decorating all the scenery.

There's even a waterfall, complete with parallax scrolling and a clever sound effect that gets louder as you approach. A variety of kickin' tunes throughout completes the near-perfect presentation.

But what else do you expect from the Rowlands brothers? Their dedication to the C64 is proven in both the Creatures games. It's easy to tell they were designed and programmed especially to make best use of the C64, proving what a powerful computer it still is.

If you missed Creatures the first time round, you're a very silly person indeed. Four brass beer tokens for such an amazing game must be the bargain of the year.

Near-perfect presentation... A variety of kickin' tunes... Easy to tell this was programmed especially to make best use of the C64.