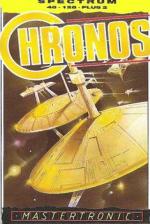 Chronos is imprisoned in another time dimension by the Mystical Dimension Weavers, beings he himself created. Six levels need to be completed before Chronos can be freed from his plight.

You pilot a laser-carrying space craft capable of moving up and down, and to the left and right through a maze of constructed space corridors. Many of these are blocked by laser barriers or other obstructions that must be cleared by blasting. As you progress alien craft, lethal orbs and rotating 'yin-yangs' fly through your space with increasing frequency. Contact with these, or any part of the space landscape loses you one of three lives. For each obstruction or attacker laser-smeared, points are awarded, with an extra life acquired at 10,000 points.

Occasionally, the letters B, O, N, U, S appear which, surprisingly enough, give bonus points should they be collected in the correct spelling order.

'An odd little game this; well presented, it looks good, sounds fair, and other than the speed, which is a touch too slow for my liking, technically I can't really fault Chronos - but it lacks sadly in gameplay, and just isn't fun. I think Chronos helps to show that simple shoot 'em ups of this genre have gone about as far as they can go on the Spectrum.'

'Let's not beat around the bush, what we have here is simply a budget shoot 'em up. No frills, no adventure, just blasting away to your heart's content. There's little imagination graphically, but the shading makes a brave attempt to bring life. Although aliens suffer badly from the shakes, and the scrolling isn't super-smooth either, presentation is well up to scratch, with a good Design Design type front end and score table, and a strange bit of title sound (rather than music). If you're not tired of shoot 'em ups then this could be game for you. The aliens never run out, but neither does your fire power.'

'The proportional spacing and high score table immediately rang a Des-Des bell, and although it's no more than a polished Scramble, I enjoyed playing Chronos. The easiness of the first level is a bit of a let down, but it does act as a warm up. The graphics are quite good, with explosions a bit reminiscent of Dark Star, but the game itself is almost totally different, and for £1.99, it is good value.'

The aliens never run out, but neither does your fire power.